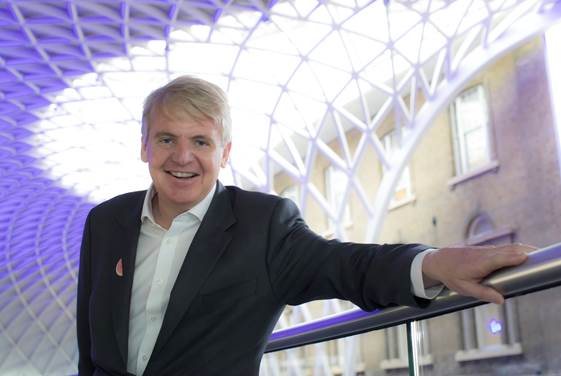 “An investor’s guide to the new agricultural revolution”, is the subtitle and topic of the book “Moo’s Law“. Author Jim Mellon is an investor and entrepreneur from the UK who, in this interview, told us about the book and how he envisions the future of our global food system.

The title of your book is a play on Moore’s Law. Could you explain this?
In 1965, Gordon Moore, the computer engineer who would go on to found Intel, noticed that semiconductors were getting twice as efficient every two years or so. “Moore’s Law” was his famous prediction that computers would continue to improve exponentially. He was right: computer chips nowadays are almost inconceivably more efficient than when he made the prediction.

So I ‘riffed’ off the term for cellular agriculture because I noticed a similar trajectory for this industry. The main reason we’re not all eating cultured meat already is the price.

In 2013, Professor Mark Post unveiled the world’s first “lab-grown burger” to journalists in London, in a project costing around €250,000 and funded by Sergey Brin, co-founder of Google. Mark went on to found Mosa Meat, where they can produce cultured beef patties for around €10 today. It’s astonishing how quickly the cost has tumbled. It’s still much more expensive than animal-derived meat, but you can see the downward trajectory  – hence “Moo’s Law”.

You dedicated this book to your dog. Why did you decide to do so?
My dog Horatio died last year and, naturally, he was on my mind as I wrote Moo’s Law. As a pescatarian myself, I’m very concerned with animal welfare and finding more humane ways to feed ourselves. It made sense to dedicate the book to Horatio, who was so dear to me.

Could you summarise your book and explain what you mean by the “new agrarian revolution”?
This book is all about the future of food. I explain why we need to radically transform our agricultural system, because the current intensive farming model is devastating to the environment, inflicts terrible cruelty on animals and risks damaging human health.

What I call the “New Agrarian Revolution” is the collection of technology-based solutions that scientists and entrepreneurs are coming up with to fix our food supply. The first wave of innovation started with plant-based meat substitutes, like Beyond Meat and Impossible Foods, which have both become hugely popular.

However, the second and larger wave of this revolution is cultivated meat, which is superior to animal-based meat in almost every way. It requires only a fraction of the land and water, results in only a fraction of the pollution, uses a negligible quantity of antibiotics and hormones, and does not require the slaughter of animals. This will be a revolutionary change not only in how we source our protein but also how we interact with the environment.

What impact will in-vitro meat have on the food market?
It’s going to have a huge impact on the global food production system. Within the next ten years, cultivated products will be cheap enough to compete on the mass market, and eventually we will witness the displacement of intensive farming as a method of protein production. This will be transformational for the food supply and should have an instrumental impact in the reduction of greenhouse gas emissions across the globe, as well as addressing animal welfare and offering consumers healthier and tastier food products.

After the agrarian revolution, who will be the producers of clean meat?
As an investor in the field, I am backing the companies that have strong leadership, defensible intellectual property and know-how and are showing the greatest ability to scale-up production as they move towards commercialisation.

In the book, I conceptualize how the field will play out in terms of three possibilities: fold, sold and bold. Some companies will inevitably fail (or “fold”) – that’s the nature of capitalism and early-stage investments. Others will sell out to the big food industry players like Nestle and Tyson, some of whom have VC arms already invested in the cellular agriculture space.  This is analogous to the biotech industry where large pharma companies are really distribution and marketing machines that acquire or “in-license” products and technologies. And some will be bold, or in other words become multibillion-dollar companies in their own right, in the same way Impossible Foods and Beyond Meat have done with plant-based meat analogues. It is these companies I believe will be the leading global producers of clean meat.

You wrote that the production after the agrarian revolution will provide enough jobs to compensate for the loss in traditional agribusiness. What kind of education will be needed to work in the new agribusiness?
Yes, I was trying to rebut the claim made by the farming lobby that the shift to cellular agriculture will cause mass unemployment for farmers.

I don’t think people realise how many agricultural jobs have already been lost over the last century or two. For most of human history, over 90% of the population was engaged in subsistence farming. Today, only 1% or 2% of Western populations work in agriculture. We have already eliminated the vast majority of agricultural jobs through technological innovation; mass unemployment did not ensue. I am simply advocating a further technological innovation that will make our food supply even more efficient.

There will be opportunities in the new cellular agriculture industry for former farmworkers: tending the bioreactors and so on. They may require a certain amount of retraining but I don’t think it will be much more onerous or technical than working in any other type of factory.

We also shouldn’t forget that huge swathes of land will be freed up for rewilding, recreation and housing, once we no longer need so much farmland. There will be wonderful employment opportunities in the new countryside. Personally, I would much rather be a park ranger than a farm labourer!

Is it possible to cultivate other products than meat (for example, milk or eggs)?
Yes, it is. For example, there are a few companies creating cheese through cellular fermentation, such as LegenDairy Foods. Traditional vegan cheese doesn’t stretch or melt the same way as dairy cheese, because it lacks the key components such as casein, which is the “addictive” protein in dairy. But new cellular techniques will allow us to have dairy that looks and tastes the same as the traditional stuff, with none of the environmental or ethical downsides.

Some companies are using “cellular aquaculture” to produce cell-based seafood. There’s one in San Diego called BlueNalu, which is scaling up very rapidly. They just raised US $60 million and plan to open a 40,000 square foot factory this year.

And some of the most exciting products are in materials. There’s a great company called GALY which cultivates cotton. Traditional cotton is very water-intensive and thus susceptible to droughts – 10,000 litres of water is needed for one pair of jeans. Moreover, 6% of the world’s pesticides are used for cotton. If they can scale up successfully, it will be a huge achievement for the environment.

How can the food industry prepare itself for the agrarian revolution?
I think a lot of the big players in the food industry are going to get involved in the New Agrarian Revolution. Some of them already have their own plant-based brands – e.g. Tyson Foods’ “Raised & Rooted” range and Purdue’s “Chicken Plus” range. And I expect many will acquire their competition in the cellular agriculture space once the technologies have been scaled up and derisked.  They will soon see the extraordinary returns are to be made there.

Do you think traditional agribusiness will disappear in the future?
Arable farms will continue because we will still need crops, but I think traditional animal farming will become a small fraction of the industry today. At most there may be some hobby farms offering premium meat cuts – in the same way that there’s a demand for luxury Wagyu beef at the moment.

What should the government do to support the agrarian revolution?
A smoother regulatory pathway is the most important action that governments can take. If one country delays approval for cultured products, it means that country will fall behind in attracting start-ups and investment. Governments should love this industry: particularly in parts of the world that rely on food imports (e.g. Britain, Singapore and the entire GCC region), it’s a great opportunity to become more self-sufficient. It will also provide many jobs in one of the most innovative sectors.

Do you think clean meat products will be publicly accepted once they hit the market?
Yes, I think so. The three biggest factors for consumers are taste, price and convenience. Clean meat products will eventually be available in supermarkets, so convenience is not an issue. There is no difference in taste, and the price, as I’ve said, will soon reach parity with animal-derived meat.

There is an effort by the agriculture industry to brand cultured products as some sort of “Frankenfoods”. I don’t think they’ll succeed, partly because the allegation is false, and partly because consumers are not too concerned with where their food comes from – you only have to look at the junk people eat at the moment. In the end, public acceptance will come down to convenience, price and taste.

You write about the current legislation, regulation, companies, and investment. Will you update this part of the book for future reprints?
Yes, absolutely. When the time comes for a second edition, I will fully revise it to take account of all the latest developments. And on the book’s website, we have regular posts to keep readers up to date with the space.

If you would like to hear Jim Mellon speak live about the topic, you can do so on 4 March. Jim will join scientists, CEOs and investors in cellular agriculture for the webinar “The Agrarian Revolution: Opportunities in Alternative Proteins” about the opportunities in the sector.

The webinar has already taken place.