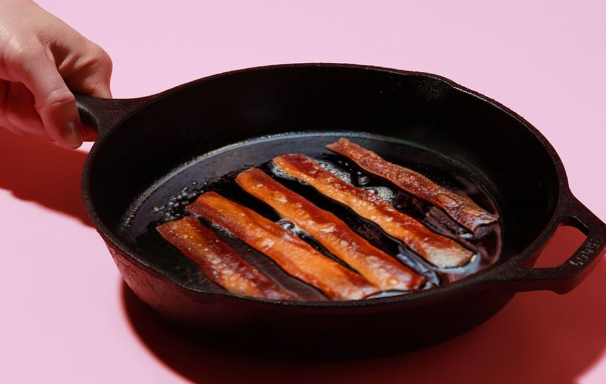 “The ocean is our biggest protein bioreactor”

Made from a proprietary formula of red algae, chickpeas, coconut and sunflower oil, Umaro’s protein offers the same crispy texture and umami flavor of conventional pork bacon, the company states. The brand’s patented extracted algae protein, UMARO™, also serves as a natural replacement for heme, the molecule that provides plant-based meat with a red color and meaty taste.

Sorrel Restaurant in San Francisco will incorporate the bacon into its famed tasting menu as a gem lettuce bite with white peach, jalapeno, and cucumber. NYC’s popular Egg Shop cafe will feature the item in its “Egg Shop Bacon Egg and Cheese” sandwich, as well as a side and meat substitute for any sandwich with bacon. D’Andrews Bakery in Nashville, meanwhile, will offer Umaro bacon in their classic BLT sandwich.

“We’ve nailed crispy bacon,” said Beth Zotter, Umaro’s CEO. “We’ve found a way to use seaweed in a totally new way to improve not just the meat, but also the unmistakable taste and texture of bacon fat.”

2022 has been an eventful year for the startup, which raised $3M in March in a round led by AgFunder. A week later, Zotter and co-founder Amanda Stiles appeared on Shark Tank, where they successfully closed a $1M deal with investor Mark Cuban.

“Seaweed offers the most sustainable, lowest-impact way to source protein, and the ocean is our biggest protein bioreactor. It requires no land, no freshwater, and no synthetic fertilizers. In the future, seaweed will supply the majority of our protein needs,” Zotter says.