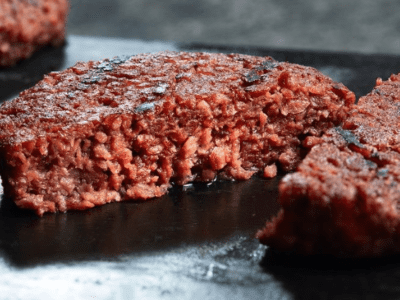 Motif FoodWorks, a Boston food tech company, is partnering with microfluidics company NemaLife to utilize the latter’s platform for in-vivo testing and protein characterization. Motif also invested in NemaLife for an undisclosed amount. Motif states microfluidic screening is new to the food and beverage space and can help quickly identify Motif’s next food tech breakthrough.  Using an AI-assisted microfluidics screening platform, NemaLife is able to test and categorize bench-scale proteins using only a fraction of the sample size typically required for ingredient testing. By effectively screening small amounts of ingredients in a matter of weeks, Motif will be able to de-risk and accelerate its product pipeline to create safe and functional food technologies, it says. NemaLife’s streamlined screening platform will also help Motif to generate … 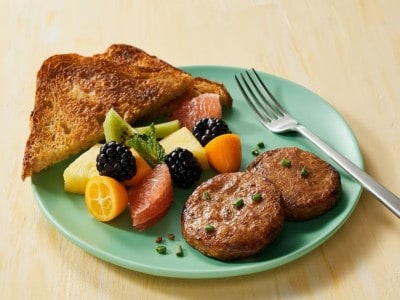 Research conducted by the Potsdam Institute for Climate Impact Research (PIK) has found that deforestation could be halved if a fifth of beef is replaced with microbial protein by 2050. This type of protein is produced via fermentation, using microbes grown in cultures. The process is similar to producing bread or beer, and was first used to make protein products as long ago as the 1980s. For the new study, researchers used a computer simulation to predict what would happen if microbial protein was substituted for 20% of the beef currently consumed. The results showed that deforestation and carbon emissions from land-use change would both be cut in half, while methane and nitrous oxide emissions would also be reduced. Fermented proteins Several companies are exploring … 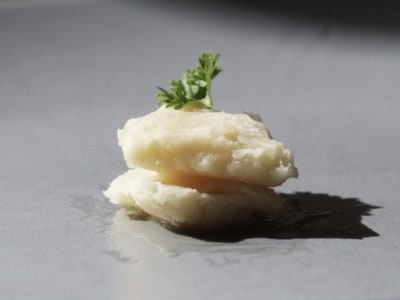 Sweden’s Melt&Marble has developed what it believes is the world’s first precision fermentation-derived beef fat. The company says this could help close the “taste gap” between plant-based and animal-based foods. In future, Melt&Marble’s platform could also be used to produce other customised fats with properties that mimic those of animal fats. According to the company, this could be a “game-changer in sustainable food production”. Initial tests conducted on the animal-free fat have concluded that it has the same gradual melting behavior as beef fat, allowing for improved juiciness and slow flavour release. Funding and commercialisation Melt&Marble recently raised €5 million in its seed funding round, and intends to use the capital to scale up production and expand its team. This will help the company accelerate … 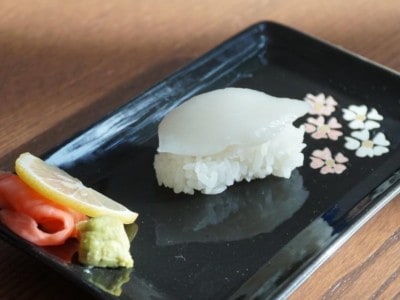 CULT Food Science, an alt-protein investment platform, announces its portfolio company CELL AG TECH is collaborating with the Centre for Commercialization of Regenerative Medicine (CCRM) to efficiently scale CELL AG’s cultured seafood manufacturing. CELL AG has also been named a winner in Canada’s AcCELLerate-ON competition for its work on scaling fish muscle stem cells in 2D and 3D. As part of the signed agreement, CELL AG and CCRM’s scientists will work on developing a cost-effective and efficient process for growing fish cells in bioreactors. A leader in regenerative medicine-based technologies, CCRM’s cell manufacturing knowledge and ability to apply regenerative medicine principles to cell culturing will accelerate CELL AG’s development processes and improve product quality, the startup says.  Though the scaling of cell-based fish and seafood … 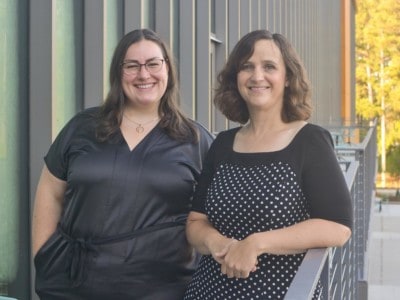 BIOMILQ, a biotech startup producing human breast milk from cultured cells, reveals its technology is on pace to reach the market in the next three to five years. Aiming to disrupt the $52 billion infant formula industry, BIOMILQ is working to combine the nutrition of breast milk with the convenience and practicality of formula.  Based in North Carolina, BIOMILQ raised $21M in Series A funding in 2021 from backers that included Bill Gates’ Breakthrough Energy Ventures. To make human milk outside of the body, BIOMILQ grows mammary cells from sample breast tissue and milk provided by local donors, reports CNN Business. The cells are then cultivated in flasks and fed nutrients before incubating in bioreactors, which provide additional nourishment and growth requirements, stimulating the cells … 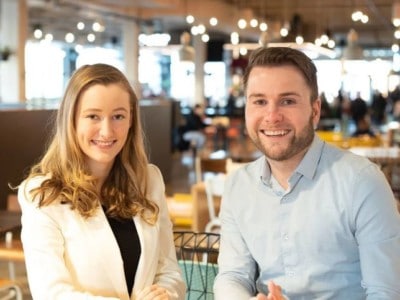 Mooji Meats, a 3D printing plant-based meat startup, has raised $3M in seed funding to advance its 3D printing technology. A graduate of Y Combinator, Mooji Meats  has developed a printer that can produce whole cuts of meat using plant-based or cultivated meat cells, including Wagyu beef, reports TechCrunch.  Founded in Baltimore in 2021 by Insa Mohr and Jochen Mueller, Mooji is focusing on larger cuts of meat rather than ground beef or sausage, since whole cuts make up 70% of the US meat market. According to Mooji’s founders, the startup wants to resolve the “trade-off” between producing quality 3D-printed meats with great texture but poor scalability. “If you go to food tech conferences, it’s the number one topic everyone talks about. It’s really important … 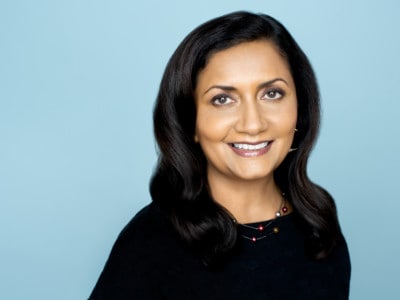 Nature’s Fynd creates ver­sa­tile alter­na­tive pro­teins born out of research con­duct­ed for NASA on microbes with ori­gins in Yel­low­stone Nation­al Park, culminating in break­through fer­men­ta­tion tech­nol­o­gy and the new-to-the-world nutri­tion­al fun­gi pro­tein “Fy”, for which it has raised an incredible $500M to date. It came as no surprise to hear the news last week that Nature’s Fynd was award­ed a $4.76 mil­lion grant from the Bill & Melin­da Gates Foun­da­tion, as the Chi­ca­­go-based fermentation specialists are no doubt operating at the forefront of the alt protein food tech revolution.  It has been two years since we last spoke with CMO Karuna Rawal, so it was time to catch up and learn more about the company’s most recent impressive achievements. Where and how was Nature’s Fynd … 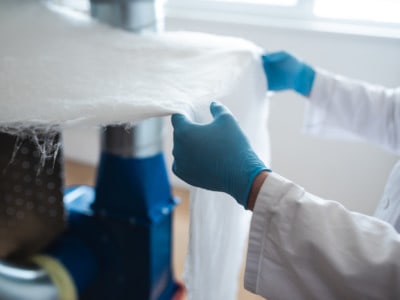 Estonia’s Gelatex has announced it is now running pilots with the capacity to produce enough cultivated meat scaffolding for 300 tonnes of meat per year. The scaffolds are made using the company’s nanofibrous materials technology. Gelatex’s work has been supported by investment from Lifely VC, a venture capital firm with a focus on removing animals from supply chains. Lifely has also invested in a range of other successful cellular agriculture companies such as Cultured Decadence, WildType, and Jellatech. According to Gelatex, the production of the scaffold material does not require much space — five kilograms per hour can be made by a machine occupying under ten square metres. This relatively small footprint should allow the company to stay ahead of demand. Aiming for price parity … 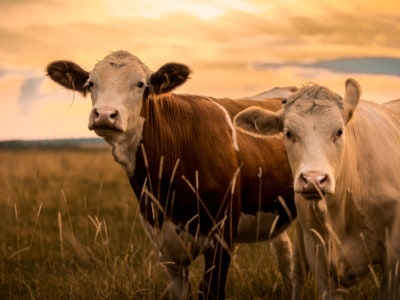 Fermify, an Austrian deeptech company developing an alt dairy platform for casein proteins, has announced the closing of its pre-seed funding. A consortium of climate tech and food investors have invested in Fermify’s pre-seed round to accelerate its casein production platform to produce real cheese without cows. The Vienna-based alt dairy company was founded in November 2021 by CEO Eva Sommer, who previously co-founded cultivated fat pioneer Peace of Meat which was acquired by MeaTech. Fermify’s fully automated digitized platform will deliver cultivated casein proteins which the company claims have the same functional properties and nutritional profile of real cheese. This will enable its customers to pursue in-house production of cow-free cheese. Casein protein is a protein found in milk that gives milk its white color, … 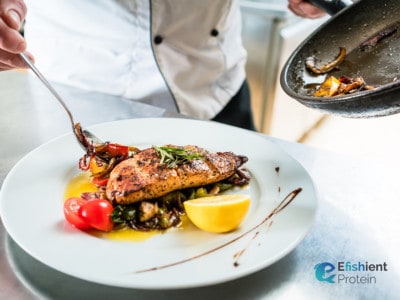 E-FISHient, a new cultivated seafood startup, has been launched in Israel. After success in the cultivated meat field, BioMeat Foodtech, the publicly traded Israeli investment fund, has collaborated with the Volcani Institute – a governmental organization and officially an arm of the Ministry of Agriculture – to develop the cultivated fish meat company. The Volcani Center, Israel’s national agricultural R&D center, will back the joint E-FISHient venture which will manufacture and market cultivated tilapia fish based on non-animal serum. The Nile tilapia is one of the most commonly grown fish species in global aquaculture – thus presenting a large market, while the serum itself is an additional product intended to serve the whole cultivated meat industry in general.  The BioMeat Foodtech partnership will hold the … 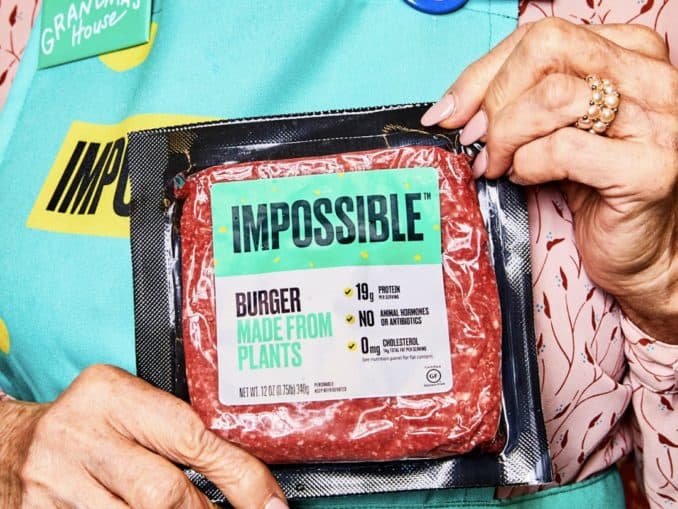 The newly released AgFunder 2022 Agrifoodtech Investment Report reveals that the Innovative Food category, encompassing alt protein companies across plant-based, cell-cultured, fermentation and functional ingredients, raised $4.8 billion last year with a 102% YOY growth, representing 9.3% of all Agri Food Tech. The report states that much of this growth is due to the effects of Covid 19, which as our readers are aware, has highlighted myriad issues around health and environment, leading to a surge of interest globally in alternatives to animal based products. Here are some of the global effects of the pandemic on our industry: USA: Americans have begun to discover vegetables for the first time, with one in five (22%) trying certain veg for the first time ever, especially leafy greens … 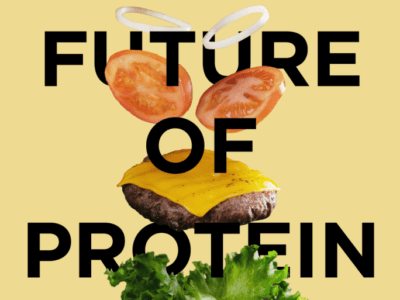 TrueInvestor, an international community of investors in the agrifood space, has released The Future of Protein – its first Global Investor Trend Report. Unlike other research reports, The Future of Protein features 30 written contributions from leading experts in the cultivated, fermentation and plant-based fields. Notable excerpts are highlighted here.  Fermentation is outperforming cultivated meat “While cultured meat is not going to be realistically viable in less than a decade or two, fermentation is quickly emerging as the true game-changer of the food revolution…It is not unrealistic to conceive a food system where a combination of vertical farming, plant-based meat manufacturing and small fermentation plants…will become an essential element of large food retail institutions.” -Sebastian Cossia Castaglione, Vegan Capital True deliciousness is essential  “True deliciousness … 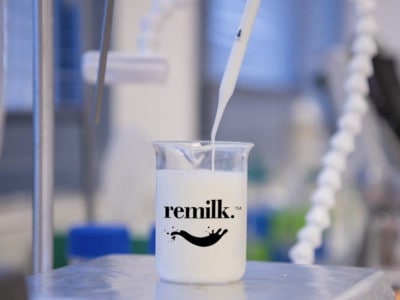 Remilk, the dairy industry disruptor, is to construct what it claims will be the world’s largest full-scale precision fermentation facility in Denmark. Remilk will produce non-animal dairy protein for use in products like cheese, yogurt, and ice cream, in volumes equivalent to 50,000 cows each year. The new facility represents the next major milestone in alt dairy, not just for Remilk but also the whole sector, in order to offer animal-free dairy products identical to their traditional counterparts but free of lactose, cholesterol, and hormones. The announcement of the new facility comes on the back of the Israeli company’s recent $120 million oversubscribed Series B funding round. Remilk has pioneered a yeast-based fermentation process to produce non-animal milk proteins for use in dairy products traditionally … 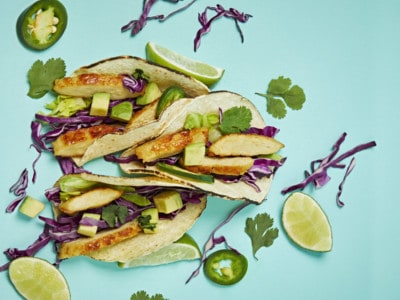 UPSIDE Foods (previously Memphis Meats) announces a $400 million Series C round which included returning investors Cargill, Tyson Foods, and Bill Gates. UPSIDE says this is the largest round in the industry to date and brings its valuation to over $1 billion, thus achieving Unicorn status. The news closely follows Upside’s acquisition of Culture Decadence, producer of cultivated lobster. Pending regulatory approval, which is slated to take place in 2022, UPSIDE Foods says it intends to initially launch on the US market. The fresh funds will be utilised to expedite commercialisation, build a commercial-scale facility with a planned annual capacity of tens of millions of pounds of cultivated meat, and develop the supply chain for ACF Cell Feed – a cell media that the company … 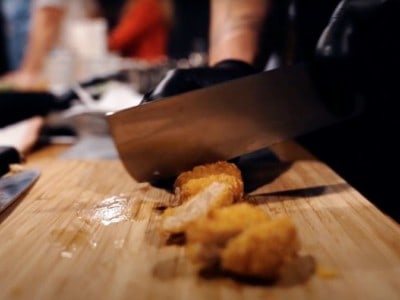 ProVeg International is teaming up with MeaTech to host a tasting session of hybrid chicken nuggets at IFFA, the world’s largest meat fair, from 14-19 May. This year marks the first time in the IFFA’s 70-year history that meat substitutes and alt proteins are being featured, with at least 200 of the 900 IFFA exhibitors booked at this year’s show offering products for the production of meat alternatives. Stephanie Jaczniakowska-McGirr, International Head of Food Industry and Retail at ProVeg, states: “This is an exciting year to be involved in the emerging cultured meat industry and the trade fair at Frankfurt offers delegates the chance to satiate their curiosity and taste the product for themselves. Regulatory approval has been granted for cultured meat in Singapore and …