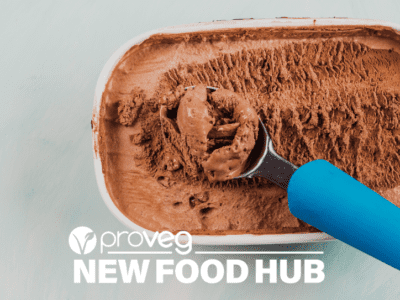 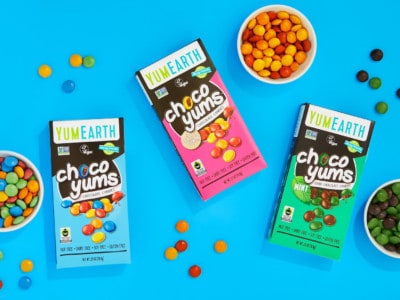 US brand YumEarth has launched Choco Yums, a new variety of dairy-free and allergy-friendly chocolate candies. The candies are made with Fair Trade cocoa and are available in three flavours — Chocolate, Crisped Quinoa, and Dark Chocolate Mint. YumEarth has a focus on allergy-friendly products, and all its candies are free of the top nine allergens. Most are also vegan, as well as free of gluten, GMOs, and artificial colourings. The brand plans to launch another new candy variety, Ultimate, over the summer. The line will feature the products Anti-oxidant Organic Pops, Elderberry Organic Pops, and Organic Ginger Lemon Chews. The market for vegan confectionery A report published at the beginning of the year found that the worldwide vegan chocolate confectionery market would be worth … 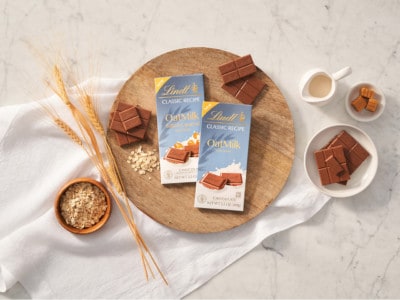 The jury of the PETA Vegan Food Award has awarded the Lindt Vegan Classic as the best vegan chocolate. Decisive factors for the award of the coveted prize include clear vegan labelling, innovation, expansion of the product range, and above all – taste. Harald Ullmann, co-founder and 2nd Chairman of PETA Germany, commented: “With its Vegan Classic oat drink chocolate, Lindt shows in exemplary fashion that enjoyable and purely plant-based taste creations are possible at any time. A vegan diet is good for animals, people and the environment. PETA congratulates it on winning the 2022 Vegan Food Awards in the ‘Best Vegan Chocolate’ category.” “We are very proud to win this title again with Lindt. The fact that our last year’s PETA Vegan Award is … 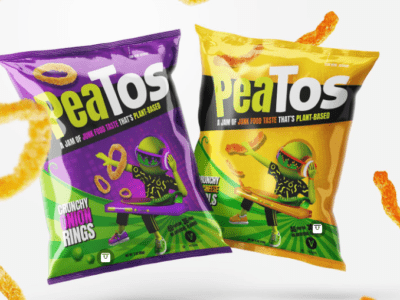 Plant-based snack brand PeaTos is expanding the retail footprint of its innovative snacks, which are now available in over 2,000 CVS Health stores and hundreds of H-E-B locations across the US.  On a mission to disrupt the $20 billion salty snack market with healthier versions of junk food, PeaTos’ products replace traditional corn-based ingredients with nutrient-dense peas. Modeled on classic Frito-Lays brands like Cheetos® and Funyuns®, PeaTos sells a range of crunchy rings and curls made without artificial colors, flavors or MSG.  Taking on the best As the brand revealed in 2020, it aims to specifically challenge Frito-Lay’s dominance of the salty snack category. “Look, if you want to be the best, you have to take on the best, and there is no one that … 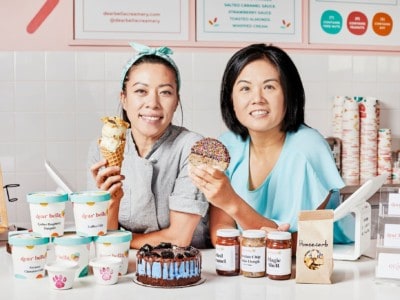 LA ice cream shop Dear Bella Creamery was founded by Taiwanese-Americans Alice Cherng and Belinda Wei in 2017 to “offer a limitless approach to plant-based ice cream and other frozen treats” and quickly became a hit in Hollywood amongst vegans and non-vegans alike, recently revealing expansion plans beginning with a new location in Costa Mesa. The best friend-founders recently announced that the entire line of plant-based ice cream, including flavors such as Mango Sticky Rice, Taiwanese Pineapple Cake, Sweet Red Bean, Passion Fruit Banana, and Matcha Soft Serve, is now available for US shipping nationwide as the business goes from strength to strength. It was time to catch up with Alica and Belinda to discuss all things vegan ice cream. Tell us about yourselves and … 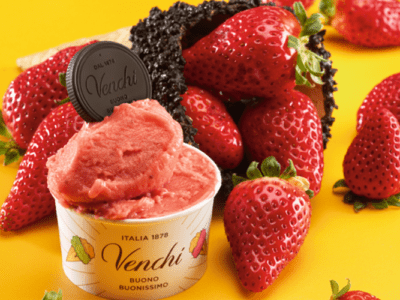 Italian chocolate maker Venchi has introduced vegan versions of four of its most popular gelato flavours. The new flavours are Bronte Pistachio, Mixed Berries, Nocciola Piemonte IGP, and Lemon & Liquorice. The Pistachio gelato has been made vegan using a water-based cream, while the Mixed Berries flavour features a blend of blueberries, raspberries, blackberries, and redcurrants. Nocciola Piemonte is a plant-based version of Venchi’s much-loved traditional hazelnut gelato. Finally, Lemon & Liquorice is made with real lemon juice and is described as having an intense citrusy flavour. Venchi already offers a range of sorbets that are suitable for vegans, available in the flavours Mango, Strawberry, Melon, Raspberry, Lemon, and Azteco (chocolate). The new gelato flavours will be sold along with the sorbets at all Venchi’s … 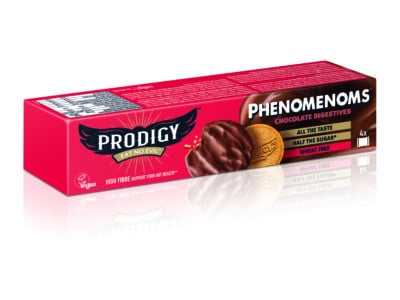 Prodigy, the UK based natural confectionery brand, recently announced the launch of a new chocolate biscuit range, ‘Phenomenoms’  available in two low-sugar, wheat-free flavours: Prodigy Phenomenoms Chocolate Digestives and Prodigy Phenomenoms Chocolate Oaties. Plastic negative Prodigy arrived on the UK market in 2019 and in 2021 became the UK’s first plastic negative chocolate range. The current portfolio offers several flavours of plant-based chocolate bars as well as the Salted Caramel Chocolate Egg launched this February in time for Easter. The new biscuits are also plastic negative; Prodigy removes five ocean-bound plastic wrappers from the environment for every product sold.   Founder Sameer Vaswani comments: “This is such an exciting launch for us as we continue on our mission to inspire the evolution of chocolate. We … 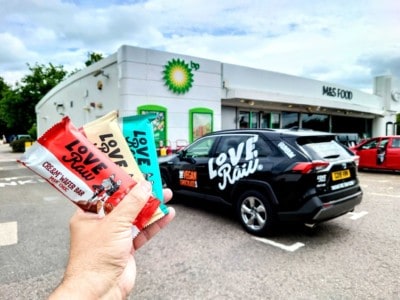 All three of LoveRaw’s Cre&m Wafer flavours are now available at M&S Simply Food locations in BP fuel stations UK-wide. Consisting of wafers coated in chocolate and filled with plant-based cream, the bars come in the flavours M:lk Choc, White Choc, and Salted Caramel. According to co-founder Manav Thapar, LoveRaw has several more launches planned in the upcoming weeks. “World’s first” When LoveRaw’s M:lk chocolate wafer bar first launched in November 2020, the company claimed it was the first of its kind in the world. The bar was quickly followed by the white chocolate version in March 2021. LoveRaw is growing quickly, and has expanded outside the UK into several other markets such as France, Spain, Switzerland, Kuwait, and Malta. In February, the brand launched … 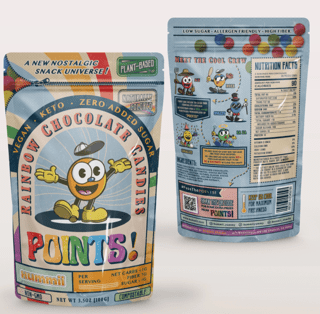 Snack brand Hummii announces its latest snack innovation, POINTS! rainbow chocolate candies are now available at select retailers in Southern California, and will launch online in a limited-time “drop” in August. M&M’s but better Made with natural coloring, POINTS! resemble classic rainbow candies but with no artificial additives or sugars. The product is dairy-free, made with just 1 gram of natural sugar and 90 calories per serving. POINTS! also contain prebiotics and are free from the top 14 food allergens. The candies are currently sold at multiple LA retailers including Plant-X in Venice, Madame Shugah, Rainbow Acres, Double Zero and more. According to founder Tyler Phillips, the discovery of POINTS! was a happy accident while the brand experimented with ingredients for its mini-muffins.  “Launching POINTS! …

2FIT BRANDS, based in Virginia USA, has introduced a third healthy snack to its popular product line. Brownie Bites are vegan, gluten-free, and low sugar. The healthy treats join the current product portfolio including Chocolate Peanut Butter, Vanilla Crunch and a 2FIT sample pack.    According to Colombian-born entrepreneurs Nathalia Rojas and Marcela Charry, 2FITBRANDS is one of the fastest-growing healthy snack food firms in the US, progressing in three years from production in their home kitchens to Amazon sales that increased 830% YOY last year. The vegan snack company launched in 2019 with Vanilla Crunch and Chocolate Peanut Butter varieties. “People are loving the products and you can find our Chocolate Peanut Butter and Vanilla Crunch Protein Bars at LifeTime health clubs around the … 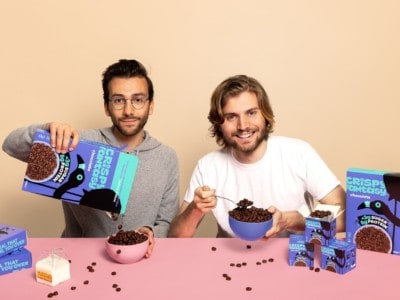 Breakfast startup Crispy Fantasy has launched high-protein vegan cereal in Europe. The product contains four times more protein and at least 50% less sugar than many leading cereal brands. Crispy Fantasy is backed by investors including Halo Top co-founder and CEO Doug Bouton, RXBar co-founder Peter Rahal, and investment fund Pareto Holdings. Bouton has described the brand’s cereals as “mind-blowingly great”. The products are gluten-free and contain soy and pea protein, along with other recognisable ingredients such as avocado oil and cocoa powder. Crispy Fantasy says its aim is to “bridge the gap” between sugary cereals and healthy options such as oatmeal. Initially, Crispy Fantasy has launched its chocolate flavour through DTC. The cereal will also be available on Amazon by the end of this … 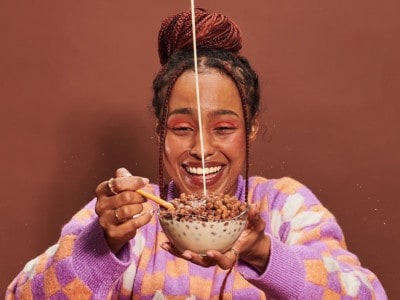 On-trend vegan protein brand Misfits, which sold over seven million protein bars sold last year through orders shipped to 99 different countries, is expanding into a new category with the launch of Chocolate and Choc Cinnamon protein cereals, following a recent rebrand. The products are low in sugar, providing a healthier alternative to most flavoured cereals on the market while also being free of gluten and animal products. Misfits says that with the new product launch it is targeting younger consumers who love cereal but are dissatisfied with the high sugar content of most brands. About Misfits Misfits was founded in the UK in 2020 with the aim of satisfying chocolate lovers who are attempting to eat a healthy, plant-based diet. The brand’s current portfolio … 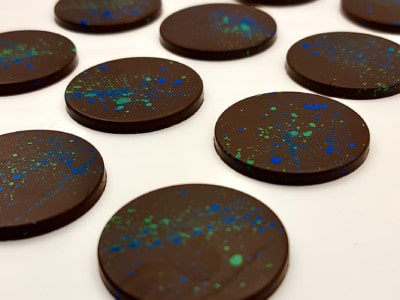 WNWN Food Labs, a UK food tech startup, has launched what it claims is the world’s first alt chocolate of its kind. Made using plant-based fermentation techniques, the new alt chocolate is cacao-free, child and slave labor-free, deforestation-free, palm oil-free, caffeine-free, gluten-free, and theobromine-free – so it will not make your dog sick.  Also boasting 80% less CO2 emissions and lower sugar than conventional chocolate, WNWN – pronounced “win-win” – has developed its proprietary fermentation process to transform sustainable plant-based ingredients into alt chocolate that the company claims tastes and melts like conventional chocolate. WNWN opts for British barley and carob for the base of its cacao-free chocolate,  developed with an in-house chocolatier. WNWN also plans to explore how other foods can be future-proofed from … 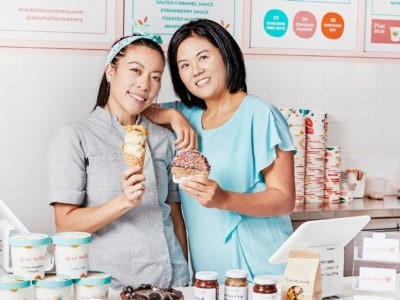 Dear Bella Creamery, an LA-based ice cream shop, announces its entire line of plant-based ice cream is now available for US shipping nationwide. Founded by Taiwanese-Americans, the brand aims to diversify the vegan ice cream market by introducing creative Asian-American ice cream flavors to mainstream consumers. Dear Bella is also opening a second LA ice cream shop this summer.  For shipping, customers can order up to five pints (5 for $65) from Dear Bella’s website. Founded in 2017 by Alice Cherng and Belinda Wei, Dear Bella produces all-natural, dairy-free ice creams in both classic and exotic flavors. Its extensive Hollywood menu features soft serve scoops, cones, sundaes, shakes and house-made ice cream cakes, among other frozen treats. According to the company, every ingredient is free of …