Canadian brand Oggi Foods first created a stir when it developed the first ever gluten-free pizza crust with rising air bubbles. But the company didn’t stop there on its mission to make pizza accessible to all. In January of this year, it launched two entirely plant-based pizzas in collaboration with Beyond Meat.

Oggi’s vegan pizzas are created with the brand’s gluten-free crust, which has won multiple awards. These include Best Canadian Product and Best Frozen Prepared at the 2018 Canadian Grand Prix New Product Awards. It has also won the Sysco Award for Best New Product and the Store Brands Editors’ Pick Award.

The award-winning crust is made with a blend of gluten-free flours, including cornstarch, potato starch, and rice flour, and it also contains cauliflower, a trending ingredient since last year. It’s stone-baked and hand-stretched, which the company says is important for creating air bubbles and removing extra moisture.

After developing the crust, the brand teamed up with Beyond Meat to develop a range of fully plant-based pizzas in response to growing consumer demand. 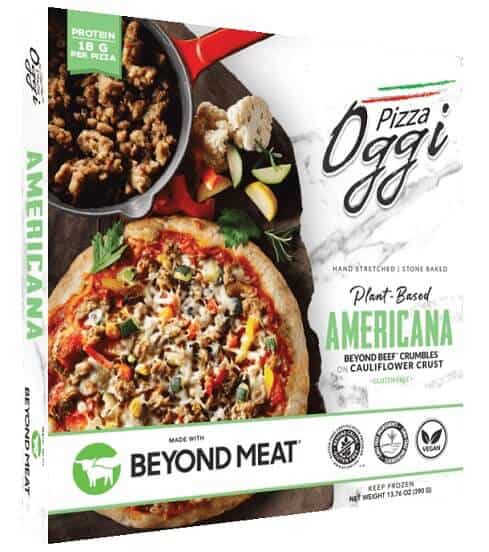 “At the moment, we have two plant-based pizzas with Beyond Meat,” said Joe Turturici, President at Oggi Foods. “However, we plan on expanding.”

Oggi’s vegan pizzas are available at several supermarkets across Canada, including Loblaws, Whole Foods, and Costco starting in early fall. But a significant percentage of the company’s sales come from the US, and it is looking to expand further into this market.

“Americans trust our flag,” co-founder Stefano Cataldo told the Montreal Gazette. “When they see ‘made in Canada,’ they know that’s good quality.”