Yesterday’s launch of the world’s first vegan-friendly and climate-conscious exchange traded fund (ETF) by Beyond Investing sees the enterprise off to a promising start, trading over $4m worth of shares in its first day on the New York Stock Exchange

We reported last month in anticipation about the launch of the US Vegan Climate Exchange Traded Fund, and today the fund has reached almost $3.75m in Assets Under Management (AUM). Listed under the ticker VEGN, this ethical investment fund designed for animal advocates and environmentalists will track the US Vegan Climate Index (VEGAN) a cruelty-free and fossil fuel-free index created by Beyond Investing.

Over the course of the day, assets in the ETF rose steadily with total volume traded over the day of over $4m. Notably the bid-offer spread over the course of the day ranged from 1-3bps, making the ETF relatively cheap to trade. The chart below shows the performance of VEGAN since launch in June 2018, versus the Solactive US Large Cap Index, comparing the price returns of both indexes from 6 June 2018 to 30 Aug 2019. 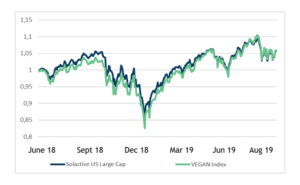 Claire Smith, co-founder of Beyond Investing, said she was pleased with the initial results and looked forward to even more platforms responding to consumer demand for ethical investment options and making the VEGN ETF available to their customers.

“As an investor myself for many decades, I’ve longed for sustainable and ESG options that don’t force me to support animal exploitation, environmental devastation and abuse of human rights,” said Smith. “I created this index and ETF to help others like me take the pain of their portfolios, so I’m heartened to see that the launch of VEGN has got off to a promising start.”

This US Vegan Climate Index takes the Solactive US Large Cap Index  and excludes any stocks whose activities are incompatible with a vegan and climate-conscious approach to investing, replacing damaging stocks with midcap alternatives that meet its ethical criteria. This means the fund avoids investing in companies whose business models rely on animal exploitation – predominantly testing and animal-derived products – as well as removing fossil fuel and environmental threats such as plastic and agrochemicals, which are harmful to wild animals.

“Animal agriculture is a leading driver of deforestation, species extinction, air and water pollution,” said Smith. “In addition to the UN’s report Livestock’s Long Shadow in 2006, two other recent reports by Oxford University researchers and the International Governmental Panel on Climate Change advocate for a shift to a predominantly plant-based diet. It’s imperative that we reward companies that take this imminent threat to our planet seriously, and where we invest our money sends a strong and powerful message to those that are causing environmental devastation.”