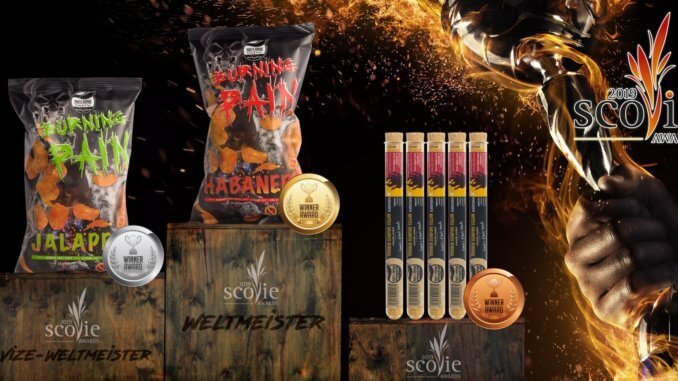 The company Puszta Peppers, based in Upper Bavaria, Germany, has won first and second place at this year’s American Scovie Awards. The company was awarded the world championship title for the tastiest chilli chips for its vegan Burning Pain Chips in the flavours Habanero and Jalapeño.

The extra spicy flavour Habanero, with a spiciness of 200,000 Scoville, is the official winner for 2019 in the Chips category of the American Scovie Awards, which annually recognises the best among spicy foods. The second flavour, Jalapeño, with 8,000 Scoville, also impressed the jury and took second place.

When it comes to taste, the special thing about the chips is their sophistication. They are not just “extremely spicy” – above all, the jury was convinced by the interplay of spiciness and taste.

Traditional chilli cultivation in the puszta, processing in Upper Bavaria

The family business near Rosenheim specialises in smoked chilli and paprika powder and attaches great importance to quality in the cultivation and processing of its chilli peppers. “We grow numerous varieties of the red fruits ourselves on our plantations in the Hungarian puszta. We also harvest, halve, and check the ripe chillies by hand in order to meet our quality standards,” reports Tobias Arlt, Managing Director of Puszta Peppers.

The chillies are then dried and cut in Upper Bavaria, and refined by being smoked with untreated homemade smoking ingredients. Puszta Peppers deliberately avoids additives such as artificial smoking aromas, spice extracts, and sugar in order to preserve the natural taste of the crispy potato chips. Potatoes from local fields in northern Germany are roasted in a kettle to make the crisps; the spicy flavouring is applied in the production facility in Prutting, Germany.