Beyond Investing‘s US Vegan Climate Index has today reported significant outperformance versus the market as it celebrates its second birthday. Since its launch, VEGAN has exhibited lower carbon, waste and water footprints per unit of revenue versus the S&P500 Index and most ESG indexes.

The index was developed by the equity research arm of impact investing platform Beyond Investing, spearheaded by CEO and former investment analyst Claire Smith. Since then, the rules-based US Vegan Climate Index has been calculated by index provider Solactive and published on a real-time basis under the Bloomberg ticker ‘VEGAN’. During this time, VEGAN has outperformed the S&P500 Index on a price return basis by 5.93%, an annualized excess return of 2.92% with a tracking error of 1.39% (a measure of the risk of deviation from a benchmark).

VEGAN is constructed primarily by excluding from the universe of the Solactive US Large Cap index (a close proxy to the S&P500 Index) any stocks whose activities are incompatible with a vegan and climate-conscious approach to investing.

Criteria for exclusion include:

These exclusions remove approximately 49% of the market capitalization of the top 500 US large cap stocks.

Activities that are directly harmful to animals provoke the majority of VEGAN’s exclusions, with a third of the S&P500 Index removed for involvement in animal testing, animal-derived products or the use of animals in sport and entertainment. Extraction, combustion and financing of fossil fuel and other environmentally damaging activities cause 11.7% of the S&P500 Index to be excluded. Some 3.9% of the S&P500 Index conflict with its weapons and human rights policies.

“Creating this Index was the first time that the proportion of the US stock market whose business models harm animals and the environment was properly identified,” says Smith. “Statistics show that 9.7 million Americans now identify as vegan and this audience is hungry for financial products which adhere to the principles that they live by, they do not want their money supporting businesses whose activities they oppose.”

The weighted average market capitalization of the 278 companies that currently make up VEGAN – which include Google, Facebook, Microsoft, Tesla and Beyond Meat – is $155bn and the median market cap is $21bn. 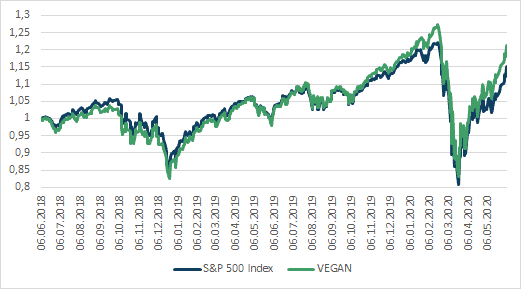 The company reports that the prevalence of the animal exploiting and companies which cause damage to the environment in certain industries means that the sector breakdown of VEGAN is quite different from the S&P500 Index. VEGAN is overweight technology, communications and financials and underweight healthcare, consumer, energy, materials and utilities, as compared to the proportions of those sectors in the S&P500 Index.

Smith states that VEGAN benefited from being overweight in technology, communications and financials, as well as its removal of energy and underweight in industrials, and these tilts compensated for it being underweight consumer stocks, healthcare and utilities. Generally, all of the exclusions except avoiding stocks exploiting animals in sports and entertainment were a net benefit to the portfolio, and especially large contributions came from the removal of stocks related to fossil fuel, military and defense, and animal testing.

Despite its different composition, VEGAN has exhibited a 97.56% correlation with the S&P500 Index on a price return basis, meaning that VEGAN moves in the same direction as the S&P500 Index 97.56% of the time. Its Beta since inception has been 1.06, lower than might be expected given the high technology component.

VEGAN’s carbon footprint is just 23% of the S&P500 Index, emphasizing its climate commitment, and altogether the companies in VEGAN use 93% less water and generate 96% less waste as compared to the constituents of the S&P500 Index.