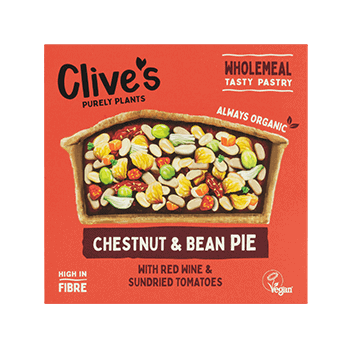 Clive’s, the much-loved British pie-maker, announces that its previously vegetarian range is now entirely plant-based. The news follows the deal with supermarket giant Morrison’s to supply vegan pies to 350 of their stores across the country, and its success in Waitrose, Holland & Barrett, Ocado and Abel & Cole.

Clive’s reports that its pies are still the favourite pie choice for most UK independent health food shops who stock the widest range of Clive’s on offer. In just the last decade, the number of people identifying as vegan in the UK has increased by 350% making it one of the fastest growing markets in the food industry.

Following such success the Devon-based producer will be relocating from their old bakery in Buckfastleigh to new larger premises in Dartmouth. Clive’s has been baking from the 6,000sqft bakery based in an old woollen mill since they first started over 30 years ago, so the new purpose-built factory marks a real milestone for the business.

Owner Sally Carson said, “This is a really exciting time for us. We’d been wanting to make the change for a while, and now that we’ve done it – it feels amazing. I went vegan myself over three years ago and it just felt like the next logical step for the business. We’ll still be small-batch baking using organic, sustainably sourced ingredients, but now customers can tuck in knowing everything is purely plants.”