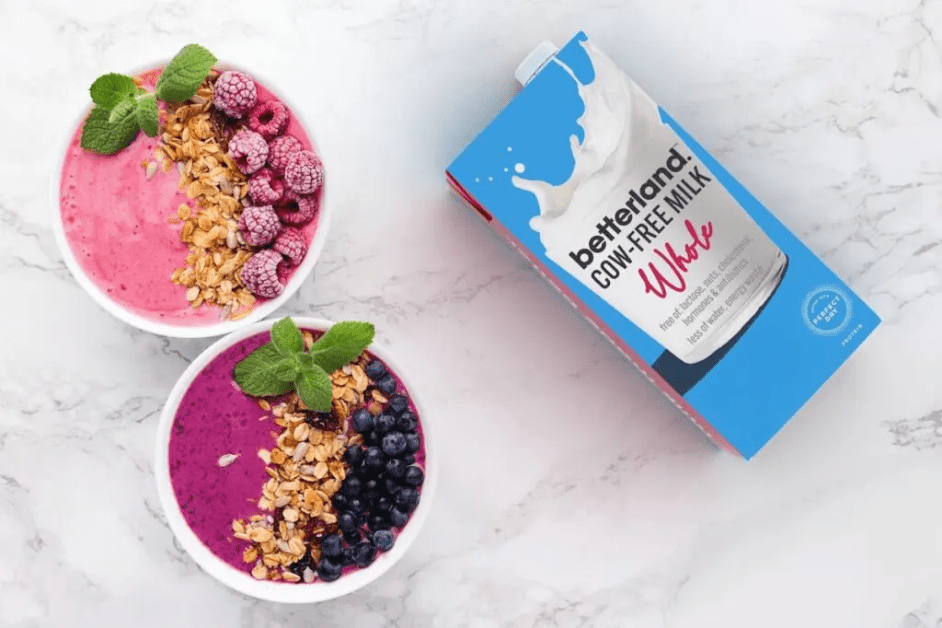 Betterland Foods is a US foodtech company that has developed highly realistic “cow-free milk” with whey protein made via precision fermentation.

The company was founded by Lizanne Falsetto, who previously founded protein bar company think!. When Falsetto heard about Perfect Day’s animal-free dairy proteins, she had the idea of developing a vegan milk that could rival the conventional variety in terms of taste and functional properties.

By combining animal-free whey protein with sunflower oil and MCT (medium-chain triglyceride) oil, Betterland has created a milk alternative that froths and whips like dairy. Having been approved by taste-testers, the company’s first products — Whole and Extra Creamy — will be showcased at the Natural Products Expo West trade show in March.

“I knew that I wanted to help create protein-based products that not only tasted good, but were also healthier for people and kinder to the environment,” Falsetto told LiveKindly. “I knew we’d nailed it when my head taste testers (my two kids) said they preferred [the cow-free milk] over traditional cow’s milk—and they can be ruthless.”

Betterland’s milk will launch at retailers over the summer. While the milk is lactose-free and vegan, it is not suitable for those who are allergic to whey.

In December, Perfect Day announced the launch of its animal-free whey protein powder, made using precision fermentation of microbes. Developed in collaboration with vegan protein powder company Natreve, the product was the first of its kind to be launched anywhere in the world.

Previously, Perfect Day has provided animal-free milk proteins to several ice cream and cheese brands, allowing them to produce vegan alternatives indistinguishable from dairy. The company has raised over $750 million in funding since its inception, making it one of the most funded precision fermentation companies in the world.

“We’re looking forward to continuing to extend our impact as we enter new categories and new markets in the months ahead,” the company told vegconomist last year.