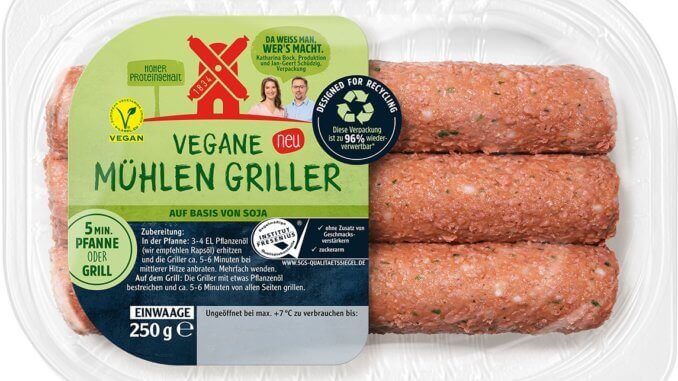 Rügenwalder Mühl, a German producer of proteins, traditionally known for its animal meat sausages, reveals that for the first time its sales of vegetarian and vegan meats surpassed its meat sales in the fiscal year 2021.

Rügenwalder reports that it generated a total of 263.3 million euros last year, an increase of 12.7 percent compared to the previous year, with total sales of around 35,000 tons; 13.6% more than in 2020, largely owing to the increase in sales of its meatless products.

This February, The German Federal Health Minister Prof. Dr. Karl Lauterbach called for initiatives to dramatically cut meat consumption in the country. And, as we reported in March, German meat consumption fell by 2kg last year to a new record low of 55kg per capita. Meat with a slaughter weight of 8.3 million tons was produced in Germany in 2021, around 2.4% less than in 2020, and imports of red meat fell by 6.8%.

“We are pleased that we are continuing to grow, especially in the area of meat alternatives. Now it’s a matter of further expanding capacities and heading for the next targets,” says Michael Hähnel, CEO of Rügenwalder Mühle.

“As a first mover in the vegetable protein sector in Germany, we have succeeded in continuing to drive the dynamic development of this category in 2021 and actively shaping the market. Now we have to stay the course in the face of current challenges in the raw materials and energy sectors and convince consumers* despite inflation and rising prices,” adds Hähnel.