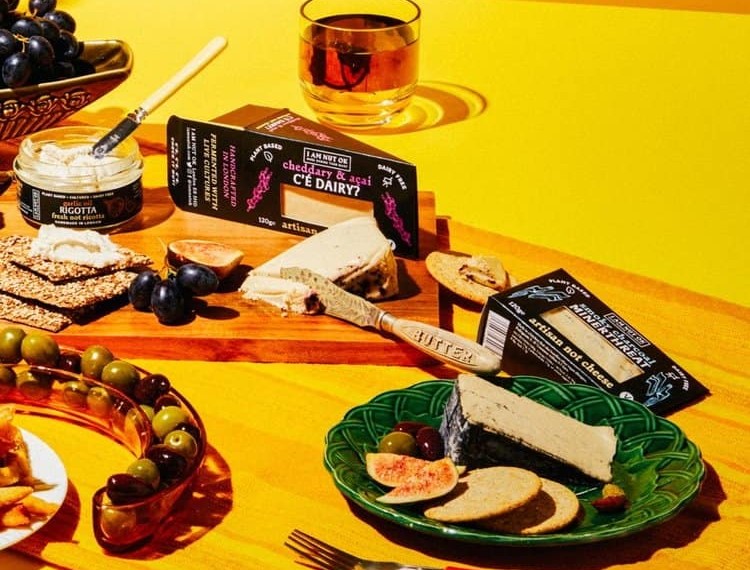 I Am Nut OK is a London-based vegan cheese brand founded by American-Italian couple Angela and Nivi. As an Italian, Nivi struggled to give up cheese after going vegan, so Angela attempted to help him by creating her own vegan cheeses. Following some successful experimentation, I Am Nut OK was born.

The brand’s cashew-based cheeses are made using a similar fermentation and aging process to conventional cheese, then flavoured with herbs and spices. The range includes plant-based ricotta, feta, parmesan, smoked cheddar, and more. A Christmas selection is also currently available, along with accompaniments such as sourdough crackers, vegan smoked salmon, and marmalade.

“I Am Nut OK is more daring than dairy, using inventive visual and flavour combinations.”

Recently, I Am Nut OK opened Third Culture, a vegan deli based at Broadway Market in London. The deli offers a selection of sandwiches, pastries, and drinks, alongside the company’s full product range. I Am Nut OK also has a Sunday stall at Victoria Park Market in East London.

Last month, I Am Nut OK appeared on Aldi’s Next Big Thing, a TV show where entrepreneurs are invited to pitch their creations to Julie Ashfield (Aldi’s managing director of buying). Ashfield praised the cheeses, but ultimately did not choose them to be listed at the supermarket chain.

However, the cheeses are already available at numerous retailers across London and the UK, including Selfridges, Planet Organic, La Fauxmagerie, The Vegan Kind, PlantX, and various restaurants and independent health food stores.

“I Am Nut OK is more daring than dairy, using inventive visual and flavour combinations. It’s not meant to replace cheese, but to satisfy the tastebuds in a way any delicious food does,” said the company on its website.