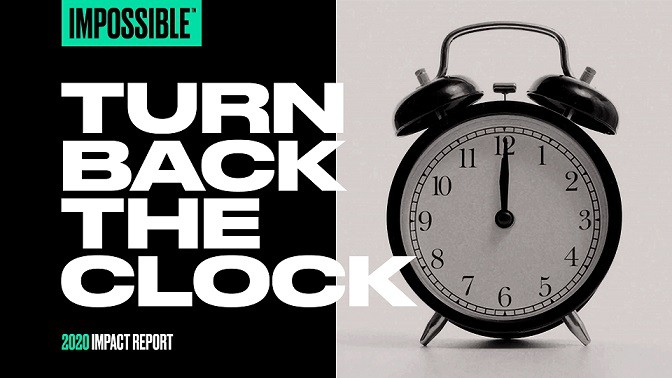 Impossible Foods published its 2020 Impact Report today, titled “Turn Back the Clock,” discussing how COVID-19 provoked the largest operational expansion in the company’s history. It explains how animal agriculture is destroying the Earth, and demonstrates how sustainable plant-based foods can help our planetary situation.

The 2020 Impact Report describes how Impossible Foods’ retail footprint increased nearly 100X in 2020 alone — by far the biggest operational expansion in the company’s 10-year history. The company says its mission is to turn back the clock on global warming, halt biodiversity collapse and fix the public health crisis by making our global food system sustainable.

CEO and Founder Dr. Patrick O. Brown discusses how to reverse global warming and halt the planet’s extinction crisis, calling calls the elimination of livestock the “magic wand” to solve the climate and extinction crises.

“What if you could wave a magic wand and make the animal-based food industry disappear? We could turn back the clock on global warming, reverse the global collapse of biodiversity and halt species extinction, deforestation, water pollution and our public health crisis?” Brown asks. “Our planet needs that magic wand. So Impossible Foods is inventing it — a new technology platform for transforming plants into delicious, nutritious, affordable meat, fish and dairy foods, replacing the old animal-based technology in the global food system.”

Saving the world one sausage at a time?

Impossible Pork was this month named on the Times Best Inventions of 2020 list, amid a time when pork consumption is skyrocketing in Asia. Do these products have the potential to make a difference to the planet? This summer the company launched a breakfast sausage patty whose impact is addressed in the report. Compared to pork sausages from animals, the Impossible Sausage is said to:

As we reported today, the market for plant-based sausages is set to soar past $1 billion through to 2028 and witness an impressive 26.5% CAGR. It remains to be seen whether the company will release a sausage link (as opposed to a sausage patty) in 2021 in order to compete with its peer Beyond Meat whose Beyond Sausage is dominating the market.

“The greatest problems facing humanity are rapidly progressing global warming and a catastrophic global collapse of biodiversity. Replacing the use of animals as a food-production technology is by far the most impactful solution to both — and the most feasible,” Brown said. “So that’s what Impossible Foods is doing, and we’re well on the way. Impossible Burger is rapidly displacing animal-based foods, and we are confident that Impossible Sausage can address the environmental impact of pigs, the world’s most widely consumed animal.”