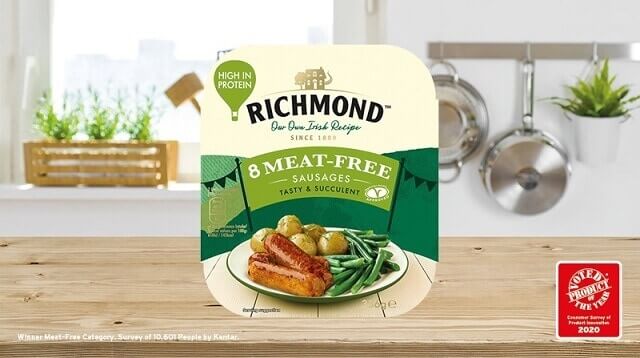 Meat producer Richmond, which has been steadily making its way into the plant-based category since its plant-based sausage launch in 2020, says it is now the third bestselling alt-meat brand in the UK & Ireland.

“Consumers are on the hunt for a totally meat-free basket, and we aim to be the first port of call.”

The vegan sausages, which were named meat-free product of the year in 2020, were joined by meat-free burgers, mince and meatballs in early 2021, then in the following May Richmond launched a plant-based bacon product claiming it to be “the tastiest, crispiest, meat-free bacon you’ll try”.

In February of this year, parent company Pilgrim’s identified the plant-based category as where it expects to see the most growth in the near future, stating that it is expecting a 74% increase in the plant-based category over the next four years. As reported by the Grocer, Richmond has now officially overtaken Cauldron to become the third bestselling alt-meat brand in Ireland and the UK. According to NielsenIQ, the brand’s retail sales increased by 50.2% to £35.4 million in the year to June 18.

Richmond marketing manager Chris Doe attributed the line’s success to an 87% rise in distribution, as well as a steady schedule of NPD. “We’ve focused on developing and promoting our new innovations in meat-free and we also made sure to champion our top sellers such as Richmond Meat-Free Sausages and Meat-Free Burgers,” he said.

“The plant-based category has a multitude of alternatives that rival classic meat options when it comes to the dinner occasion, but consumers are on the hunt for a totally meat-free basket, and we aim to be the first port of call,” said Doe.