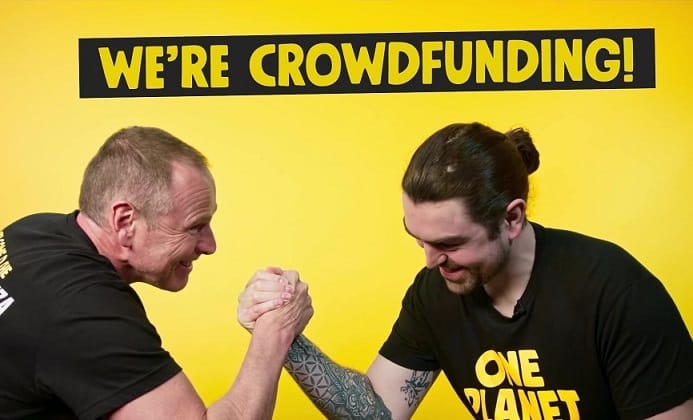 One Planet Pizza has a plan: to save our planet, one slice at a time, with epic tasting frozen plant-based pizza.

As a family-founded brand, established in 2016 in Norwich, it all started in the home of father and son founders, Mike & Joe Hill, and quickly became a successful local business.

The pizzas are stocked in hundreds of outlets in over a dozen countries. The band’s UK presence is strong with a direct ecommerce site, and export is a large part of the business. One Planet Pizza is now ramping up production ahead of a major retailer listing launching in April of this year and is in discussion with other UK supermarkets to support increasing their plant-based range.

Having perfected the range and expanded across markets and channels, the team plans to achieve rapid growth in order to become the number one frozen vegan pizza brand on the planet within the next three years.

The team has just launched a second round of crowdfunding through Seedrs – the first crowdfunding round in five years. One Planet Pizza launched the UK’s first ever crowdfunding campaign for a 100% vegan company, attracting investment from both the UK and internationally.

Co-Founder Joe Hill, says: “It’s exactly what we need to show our investors that vegan pizza is well on its way to becoming mainstream and we’re here to stay.”

No longer a niche market

The frozen pizza market is worth over $19bn worldwide, and the interest in plant-based swaps is increasing by the day, with Domino’s newest vegan PepperoNAY pizza topped with vegan pepperoni discs.

In a recent survey of lockdown takeaway preferences, pizza was found to be the nation’s favourite option, and Veganuary saw its biggest year yet with 629,000 people from 228 countries taking part, and more businesses joined the movement than ever before.

The story so far…

One Planet Pizza has strong strategic relationships with well-established brands in the plant-based space. Topping their core range with meat alternatives such as This isn’t bacon lardons and Jack & Bry Pepperoni,  and working with other global giants such as Violife and VFC to create exclusive limited-edition pizzas – with the most recent ‘pizza pockets’ selling out online in just 24 hours.

Since launching in 2016, the team has worked tirelessly to perfect the range – crafting the perfect base, smothering it with a family recipe sauce, and taste-testing the best toppings. Even finding the meltiest cheeze.

The core range now mirrors the UK’s favourite pizza flavours – making it easier to make the switch to plant-based without compromising on taste. The range is topped up with other popular pizzas such as Mac n’ Cheeze and the Cheezeburger, and additionally there is a range of gluten-free pizzas, sold through the website and shipped across the UK using carbon neutral deliveries.

Working with My Emissions, the products have been awarded carbon ratings which will be displayed on the packaging. Three of the core range were rated A – and one is rated B.

Looking at the range overall, the products have a 47% lower carbon footprint than meat and dairy topped pizzas. The work will be continuing with the experts at My Emissions throughout this year to map out how OPP becomes climate-neutral as business scales.

Co-Founder Mike Hill, says: “We all know the future is plant-based and the proof is in the pizza – having grown our business 800% since our first campaign in 2016, One Planet Pizza is the third fastest-growing food business to have crowdfunded. We have really seen the market wake up to plant-based and are confident about the future of pizza for our planet.”