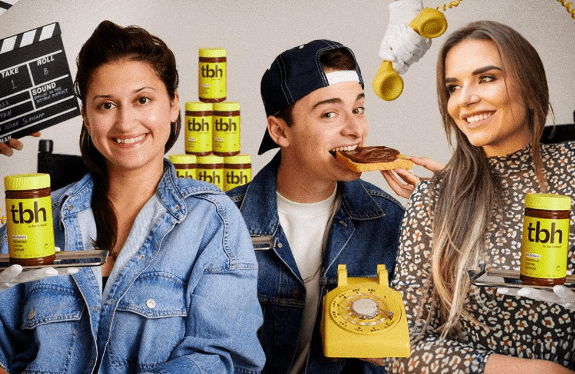 TBH, the vegan hazelnut cocoa spread co-founded by Stranger Things star Noah Schnapps, announces a realignment of its executive team, with investor and co-founder Ba Minuzzi joining current CEO Elena Guberman as co-CEO, and Ms. Guberman becoming a co-founder. According to tbh, these changes mark the beginning of a strategic growth trajectory for the brand.

“Ba worked directly with Noah since the inception of this brand, with knowledge of celebrity relations and marketing that will play a key role for our brand”

Created as a better-for-you alternative to conventional hazelnut spreads, TBH (an anagram of To Be Honest) sells spreads made with simple ingredients, less sugar, and don’t use any palm oil. Since launching in 2021, TBH has built an impressive online following with over 160,000 fans on IG and TikTok, and over 20 million views of its content, thanks to Schnapp’s celebrity influence.

The brand’s new co-CEO, Ba Minuzzi, is a well-known venture capitalist who leverages her platform to guide celebrities to build purpose-driven and conscious brands. Within five years of becoming a venture capitalist, Ba invested in more than 100 startups, a now publicly-listed company, four unicorns, and multiple companies in the consumer packaged goods (CPG) industry.

TBH was the first startup Ba launched as a behind-the-scenes co-founder with Schnapps.

“Ba is an incredible investor and leader, with skills complementary to my own,” says Elena Guberman, co-founder and co-CEO of TBH. “ Ba worked directly with Noah since the inception of this brand, with knowledge of celebrity relations and marketing that will play a key role for our brand in the years to come. Being a solo founder is a hard road, and I’m beyond excited to work side-by-side with Ba in a greater capacity as we continue this journey to reimagine nostalgic snacking and deliver our products to consumers worldwide.”

“I’m honored to join the C-Level team of tbh on the company’s 1-year anniversary and it’s been a humbling experience to work alongside Elena,” said Ba Minuzzi, co-CEO of TBH.

She continued, “Elena is a remarkable leader who has taken our delicious brand into over 500 doors in under 1 year, in addition to securing partnerships with fast delivery platforms, like Gopuff and Getir, and exceeding our expectations from DTC. It’s an incredible responsibility to help co-lead a brand on a mission with an honest commitment to do better. It takes a team to drive a company forward and we’re excited for what’s next.”