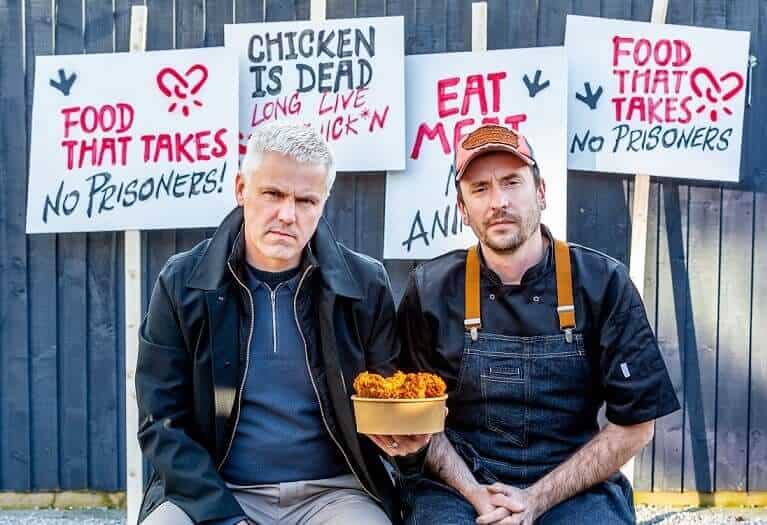 Matthew Glover, the vegan serial entrepreneur and the founder of multiple world-changing vegan projects such as Veganuary, Million Dollar Vegan, and Veg Capital, today announces the launch of Vegan Fried Chick*n Company VFC with plans to overtake the chicken industry. “This is where food meets activism. This is our sit-down protest.”

Speaking to vegconomist today, Glover describes the vegan fried chicken product which is created from wheat protein and is soy- and nut-free: it looks, tastes and pulls apart like chicken, is “made for carnivores and suitable for vegans.”

Key to the company’s mission is first to achieve price parity with slaughtered chicken, with the aim to then outprice animal products and eventually offer to the public a product that tastes, looks and smells like chicken but costs less. The potential impact here is immeasurable.

“There’s over 3600 fried chicken shops in the UK alone. We already compare favourably on taste, and our aim is to compete on price and convenience with fried chicken on a global scale.

“We’re an activist business. We set up the company because we care deeply about the injustice of factory farming. Campaigning for the animals will be at the core of our message, and the sale of delicious vegan fried chick*n will help us expand that message, and save many millions of chickens from suffering.”

This game-changing foodservice initiative was founded by Glover together with renowned chef and restaurateur Adam Lyons, after trying his chick*n product: “After a Zoom call during lockdown, Adam kindly sent me some frozen VFC, chips and BBQ sauce. It was just like what I’d been eating in the restaurant. I sent him an email saying ‘we need to talk’ and ever since we’ve been working towards this moment.”

Glover and Lyons have appointed an ambitious team to realise their hugely ambitious (though after a year like 2020, one would say highly realistic) targets, including a sales director whose aim is to expand the products from their current online availability and onto the high street as quickly as possible.

Since launching only this year, Glover’s vegan investment fund Veg Capital has helped to launch numerous successful vegan food companies including The VeganKind and The Mighty Pea, and now with VFC he turns his attention for 2021 and further towards helping “the biggest victims of the factory farming system” – chickens.

The products now available at the VFC online shop, and soon to arrive in brick and mortar:

VFC states its mission as this: “Ours is an act of positive rebellion against a system that has brought us climate change, environmental destruction, factory farming and slaughterhouses. We applaud those who fight serious injustice with placards and demonstrations, with letters to MPs. We salute those who take to the streets with megaphones or lock themselves to railings. Our way to dismantle this destructive system is with great food. This is our sit-down protest.”