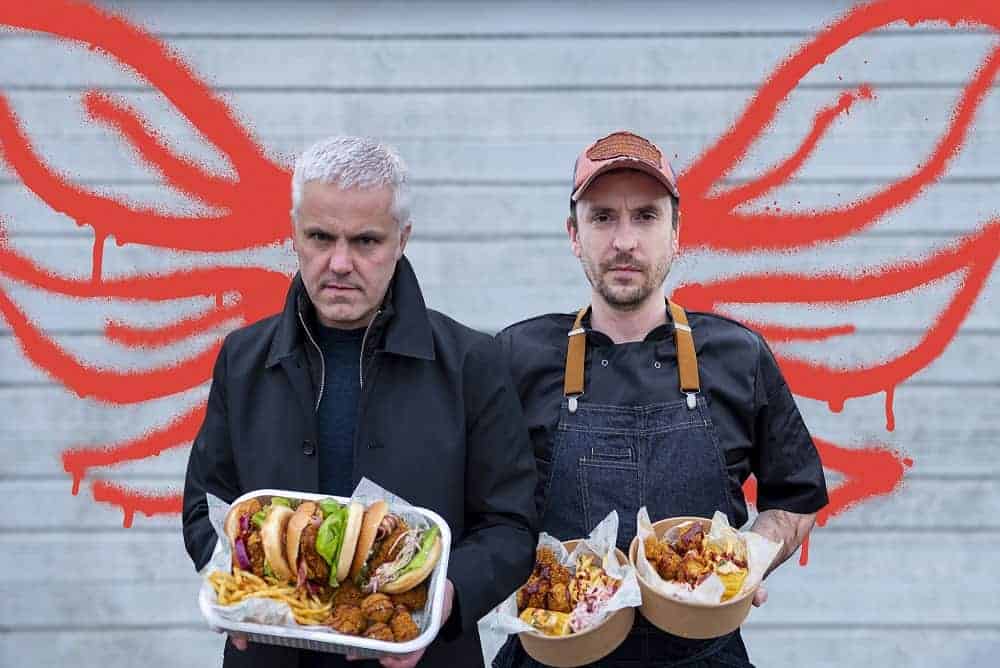 VFC launched at the end of December 2020 with a very simple mission: to take on the chicken industry. A “sit-down protest” with the purpose of saving as many lives as possible. Now, less than three months after launch, the first international shipment has already been received, after securing deals with seven UK food service outlets and two e-commerce platforms (full list below).

Glover launched VFC with chef Adam Lyons, to “cluck the system” with a simple and delicious solution to a most urgent problem: 69 billion chickens were killed in 2018 for meat consumption alone. A Guardian report just last week revealed that “Chickens are “dying like flies” in their millions while being transported from farms to abattoirs because of poorly ventilated lorries.”

The scale of the suffering is unfathomable, unjustifiable, and unnecessary.

Says Glover, “This is a tragedy. This is why we started VFC.”

Yesterday 1st of March, VFC made its international debut, through a deal with Madrid’s Vegan Nutrition, a distributor that services both retail and food service channels in Spain and represents, amongst others, household names such as Fry’s, Beyond Meat, Linda McCartney, Moving Mountains, Tofurky and The Meatless Farm.

In the meantime, the brand has already amassed a cult following through its bold advertising, attracted 15.5K followers on Instagram, and is available in the following brick and mortar locations as well as ecommerce platforms The VeganKind and The Grub Guys.

“From the very first moment we launched, overseas demand for VFC has been phenomenal and so we’re delighted to sign our first international deal with Vegan Nutrition in Madrid. This long-standing company has an ethos very aligned to our own, which makes them the perfect partner, and we join some fantastic brands already represented by them,” says Sales Director Stewart McGuckin.

“This is the first of many international deals on the table, and it takes us a step closer to our ultimate goal: the end of factory farming.”

VX in Bristol was the first brick and more stockist. Founder Amandine enthuses, “We almost sold out all our VFC stock in the first two days which is amazing!

“The response has been really great!  A lot of people saw the news and were really excited to buy and try the product. Some already bought it online and were really pleased to be able to buy it in a shop; we definitely saw more people than usual this weekend thanks to the VFC products.”