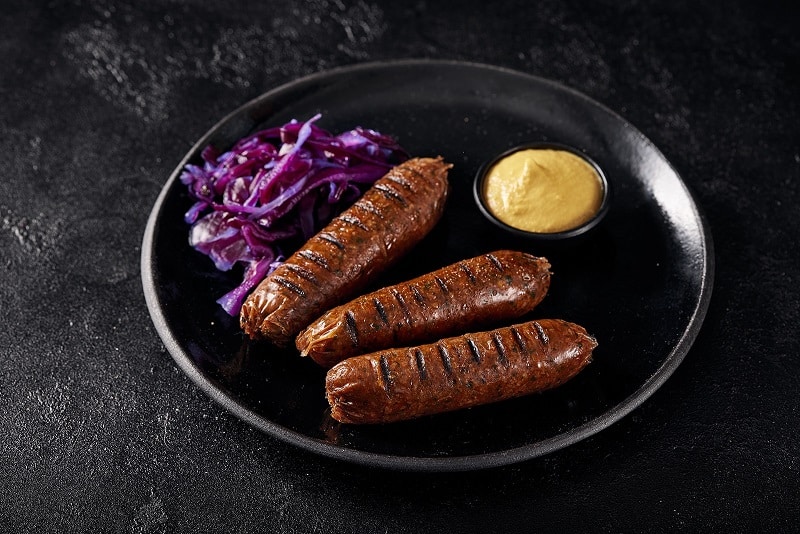 3D printed alt meat leader Redefine Meat announces the commercial launch of its first-ever series of ‘New-Meat’ products in Israel, which are available today in food service locations (listed below) with a European rollout to follow in Q4 and USA and Asia expected next year.

“We don’t expect you to like it, we expect your mind to be blown.”

The company also revealed that following January’s pilot test – the largest-scale public blind-tasting of alt meat products to meat-eaters, which saw unprecedented success with over 90% acceptance rate – it will launch its first whole cut range later this year, with its eyes firmly set on meat-eaters.

“Launching our first product portfolio represents a big step in our mission to become the world’s largest meat company, and accelerates our ability to bring to market our further innovation later this year” says Eshchar Ben-Shitrit, CEO and Co-Founder of Redefine Meat, who describes the 3D printed meat process in an editorial for vegconomist here.

“Each product in the range and the ones to follow are born from our understanding of meat at the molecular level, extensive R&D and technological innovation, which combined provides us the ability to create any meat product that exists today. This has been critical to achieving a superiority in taste that honestly, we did not even expect, and the technological versatility to do what no other has done – replace every part of the cow with tasty plant-based meat.”

The Redefine Burger offers 170 grams of New-Meat which was developed with feedback from leading chefs and butchers in Europe. The burger was successfully tested in an exclusive behind-the-scenes launch at Israel’s most prestigious meat restaurant, which had never served alternative meat until then.

The Redefine Ground Beef according to the company was designed to provide the most versatile and easy to cook minced meat offering in the market and is said to perform particularly well on a charcoal grill. The ground beef product reportedly achieves sufficient quality and cooking performance for chefs to use as a culinary base for a wide variety of dishes in the best restaurants in the world,

Further products include Redefine Sausage in the style of a traditional pork sausage, and the Redefine Cigar which is a middle eastern filled pastry designed with the hospitality industry in mind, allowing for simple cooking in ultra-large quantities and is the first in a range of products targeting this segment.

Finally, Redefine Kebab was designed to address the most common meat street food dish in cuisines from the middle east through to India.

In 2018, my co-founder and I started with a vision to replace the entire cow with tasty meat alternatives that would be embraced by meat lovers around the world,” says Ben-Shitrit.

Redefine Meat recently secured $29 million USD in funding, the highest ever Series A round for an alternative meat company at that time. “With the backing of such strong investors and strategic partners, and the incredible global interest we continue to receive, the progress we have made has been phenomenal and we’re only just getting started. For those seeking to believe it, I encourage you to try our New Meat and taste it for yourself. We don’t expect you to like it, we expect your mind to be blown.”

Redefine Meat is also currently finalizing production of a first-of-its-kind large-scale factory housing both meat pilot-lines and Redefine Meat’s industrial-scale 3D Printers, which will produce New-Meat at scale to the Israeli market and beyond. Such has been the rapid growth, the company has tripled its employees to over 100 and hired leading chefs such as Shai Heiman, who previously worked at US-owned Manrissa restaurant (three Michelin stars), as well as Rafael, Toto restaurant, OCD and more.