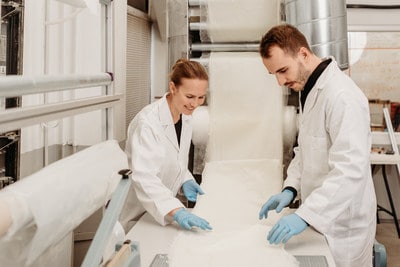 Estonia’s Gelatex Technologies has raised €1.2 million to fuel its innovative approach to cultivated meat scaffolds. The startup’s technology has the potential to slash the cost of cultivated meat.

Gelatex’s seed funding round was led by Change Ventures and Crosslight Partners. Previously, the company has received support from US accelerator Techstars.

What are cultivated meat scaffolds?

Scaffolds are what give cultivated meat its structure. The cost of currently available scaffolding materials — currently a huge €100,000 per kilogram — is one reason why the price of cultivated meat remains so high. But Gelatex claims that with its nanofibrous scaffolding material, costs can be slashed to €1000 per kilogram — and this figure could be brought down much further.

“If we stay true to our ambitions and keep scaling our technology, it will cost only €40 in less than five years and €20 in less than ten years. This is less than €1 of scaffold per kg of meat,” Gelatex CEO Märt-Erik Martens told FoodIngredientsFirst.

Already, Gelatex is working with eight of the world’s top cultivated meat producers to test this technology. Results so far have been positive, demonstrating that the scaffolds work effectively.

Currently, the price of cultivated meat is a major barrier to widespread adoption, but a number of companies are attempting to bring costs down. For example, Chinese company CellX says it is aiming for price parity by 2025, though it has not specified how it will achieve this.

Meanwhile, Mosa Meat has slashed the cost of the fat medium used in its products by 66 times, while one Indian cultivated meat company claims it is already at price parity with conventional chicken. And South Africa’s Mzansi Meat says it is confident it will achieve price parity within the next five to ten years.

“The landscape at the moment is not the same as it was, say, 5 years ago,” Mzansi’s founder Brett Thompson told vegconomist in an interview. “There are varying types of 3rd party providers working on effective and affordable bioreactor, cell culture media, scaffolding, and growth factor solutions and platforms which will help to fast-track the cost-effective development process on our path to a viable product.”