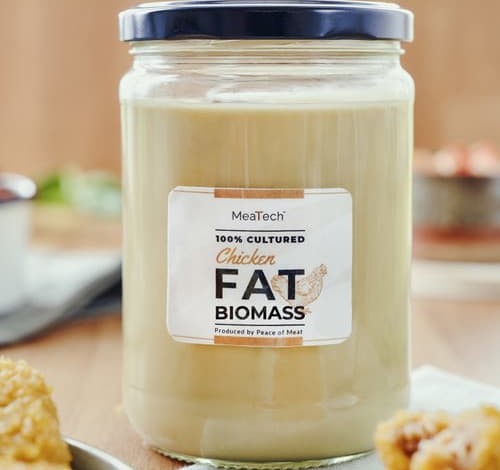 Israeli cell-cultured meat company MeaTech 3D has announced that its subsidiary, Peace of Meat, has produced over half a kilogram of cultured chicken fat biomass in a single production run.

According to MeaTech, it is likely the first time such a large quantity of animal fat has been produced in one batch outside of an animal. The company hopes its cell-cultured fats can be used to enhance plant-based meats, encouraging omnivores to make the switch to more sustainable alternatives.

Eventually, MeaTech and Peace of Meat aim for the fat to be produced on an industrial scale, achieving price parity with conventional chicken fat. They are among a growing number of companies seeking to increase the fat content of alt-meat products.

Peace of Meat is notable because it was the first company in Europe to produce a GMO-free stem cell line for developing cell-cultured products. It was fully acquired by MeaTech last December, following a €1 million investment two months earlier. Then, in March of this year, MeatTech became the first cell-cultured meat company to be publicly traded.

“The production capabilities we have demonstrated today are a successful step in line with our strategy of developing a pilot plant for cultivated fat production, which we are planning for 2022,” said Sharon Fima, CEO and CTO of MeaTech.