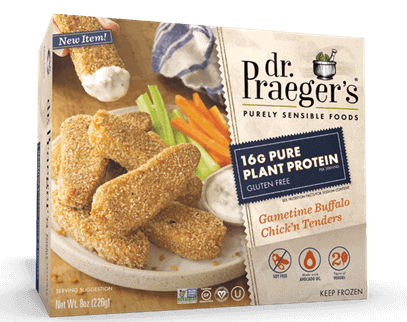 According to the National Chicken Council, Americans will eat a record 1.4 billion chicken wings this Super Bowl Sunday. Dr. Praeger’s introduces  Gametime Buffalo Chick’n Tenders in order to address the issue. The wings are vegan, gluten-free, and soy-free.

Dr. Praeger’s Sensible Foods was founded in 1994 by two practicing cardiothoracic surgeons and the family owned and operated company is now a leader in the all-natural, vegetarian, vegan, gluten free, and kosher frozen food categories.

The Dr Praeger’s wings are available in most grocery stores including Kroger and Albertsons. Other vegan wings on the market are available from Gardein, which offers a range of vegan chicken products including Sweet and Tangy Meatless Barbecue Wings and spicy gochujang style chick’n wings.