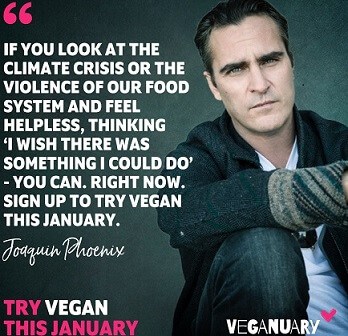 Veganuary today releases passionate personal messages from climate-conscious celebrities urging everyone to ‘Join the New Year’s Revolution’ and sign up to the 31-day plant-based pledge. The urgent call to action marks the launch of Veganuary’s 2020 campaign and is backed by Hollywood actors, and high profile environmentalists and athletes.

The celebrity backing comes in the same week that the global charity launched a Crowdfunder in order to broadcast as widely as possible a revolutionary TV advert which has the potential to change hundreds of thousands of hearts and minds this January.

Speaking from the heart, Hollywood superstar Joaquin Phoenix says: “If you look at the climate crisis or the violence of our food system and feel helpless, thinking ‘I wish there was something I could do’- you can. Right now. Sign up to try vegan this January.”

His message is echoed by environmental journalist George Monbiot who says: “If we are serious about protecting the living planet and all its inhabitants, we must accept that meat and dairy are extravagances we can no longer afford.”

See a full list of the Veganuary supporters and their quotes here.

More than a quarter of a million people took part in Veganuary last year and over half a million have participated since its launch in 2014. Now, Veganuary campaigns in four new countries – Germany, the US, South Africa and Chile – as well as partnering with dozens of NGOs around the world. The goal this year is a global total of 350,000 sign-ups

Toni Vernelli, Veganuary’s Head of Communications, says: “Each of us can help fight climate chaos with our forks. Signing up at Veganuary.com is a fun and empowering way to tackle this serious global threat. All of our resources are completely free, friendly and supportive – so why not do your part for the planet and give it a go!”