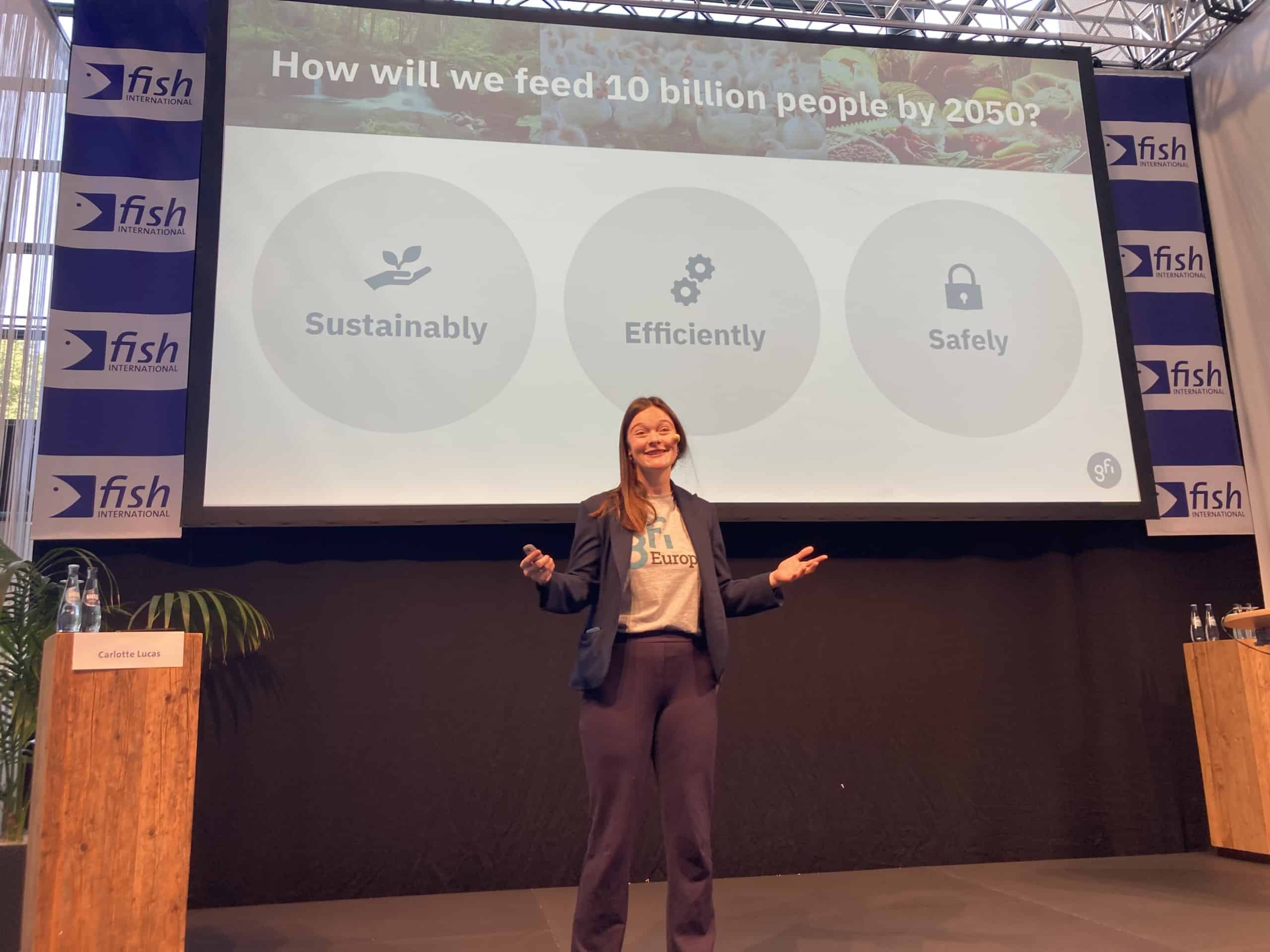 Germany’s Fish International fair took place at the beginning of September 2022 in Bremen, where numerous fish and seafood alternatives were exhibited among experts from the fish industry.

Parallel seafood business meetings also took place, including one by the GFI Europe, the leading NGO in the field of promoting alternative proteins.

Carlotte Lucas of the GFI provided the attendees with an overview of the state of the alternative seafood industry, highlighted the latest market and consumer insights, shared concerning data on fishing and the oceans, and discussed development updates and innovations in the seafood alt space.

Here follows Carlotte’s report from the event, courtesy of the GFI.

Taking a dive into the alternative seafood industry

A voyage is on course to find delicious seafood products that can take pressure off our oceans – with a rich bounty waiting for those who choose to take part.

Earlier this month, I went to Fish International – one of the largest trade fairs for the European conventional seafood industry – to demonstrate the enormous potential that plant-based, cultivated and fermentation technologies hold for companies of all shapes and sizes entering the alternative seafood sector.

Like my visit to the meat industry trade fair IFFA earlier this year, this was an excellent opportunity to work with the existing industry – a vital step in creating sustainable choices that will be appealing and accessible to everyone.

“there are no longer plenty more fish in the sea”

There’s a clear need for these products to be developed quickly – because there are no longer plenty more fish in the sea.

More than 90% of our oceans are now either overfished or fished to their limits, while global demand for seafood is expected to increase by 5% over the course of this decade. Aquaculture is only expected to keep pace in 17 countries, and 800 million people are at risk of malnutrition if the local catch continues to decline.

There’s a pressing need to find alternatives in Europe, as the continent imports three times more seafood than it produces and nearly half of EU marine habitats have been assessed as either endangered or near threatened, mainly due to pollution, fishing and aquaculture.

So at Fish International, I talked to attendees about how plant-based and cell-cultivated fish can help satisfy the growing demand without further harming our oceans, but I explained the huge opportunities for those entering the market.

While plant-based seafood sales are currently small, they are on the rise. In 2020, sales in Germany stood at €1.9 million – an increase of 190% from the previous year. And according to BCG/Blue Horizon, the alternative seafood market is set to expand by 22% between 2020 and 2025 and a further 28% in the following five years.

Production is not limited to coastal regions, so transportation costs and spoilage are lower. The market is demand driven and can better withstand supply chain shocks. And, as seafood is often sold at a higher price point than meat such as beef and chicken, alternatives can compete with conventional seafood on price more quickly. Also, thanks to advances in technology, it’s possible for this food to be as nutritious as the seafood it is replacing.

“as seafood is often sold at a higher price point than meat such as beef and chicken, alternatives can compete with conventional seafood on price more quickly”

The Fish International trade fair was a great opportunity to introduce attendees to startups such as Revo Foods, who are launching a 3D-printed product next year, and Bluu Seafood, who are preparing to take the world’s first cultivated seafood product to market.

Happy Ocean Foods were showcasing their new plant-based surf and turf product – launched in partnership with Beyond Meat and due to be unveiled in European food service outlets later this year. 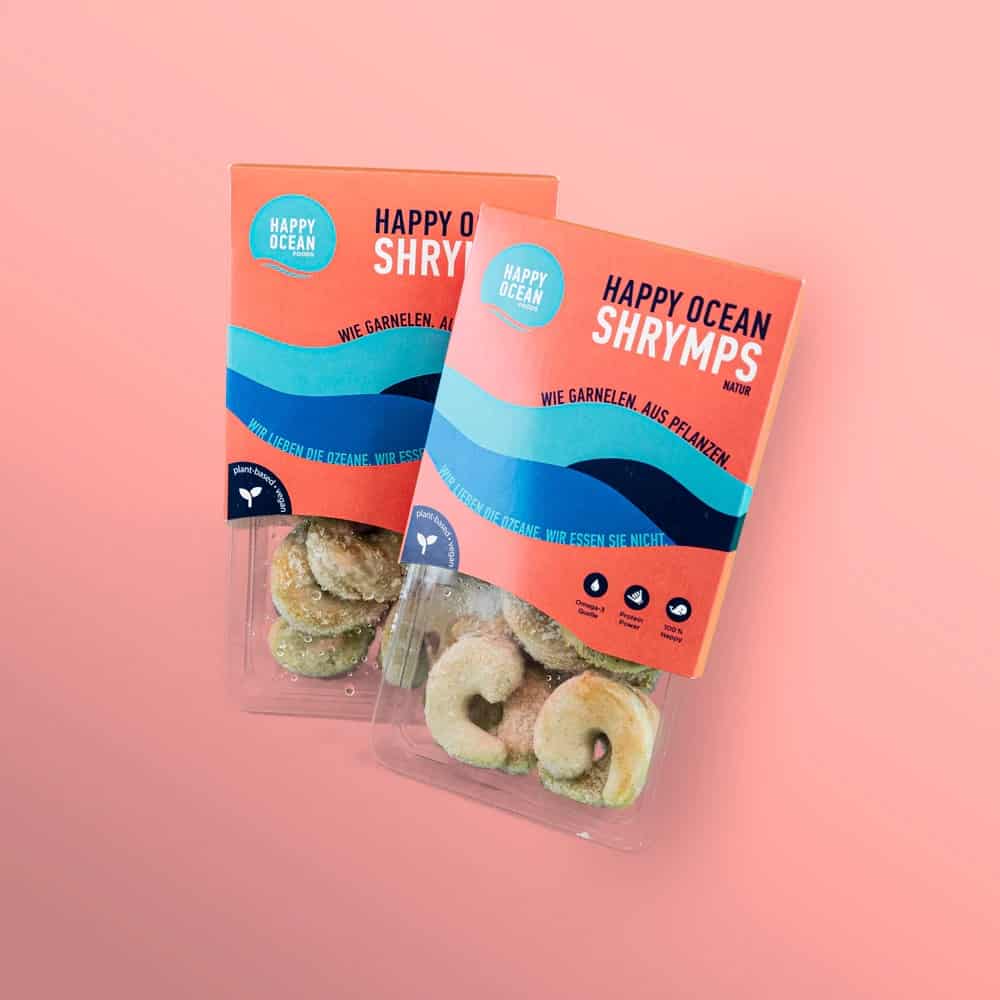 Although breaded whitefish remains the most common product, companies are developing everything from cod and salmon to lobster and caviar.

With hundreds of varieties of fish in the ocean and rapid advances in technology changing what is possible, there are huge opportunities for innovation, and local startups are able to cater for different tastes or find alternatives to species at risk of overfishing.

It was also good to see established food companies such as Nestle Professional and FRoSTA showing their alternative seafood products.

This is in line with an encouraging trend of big players coming on board. In August, Thai Union and Chicken Of The Sea Frozen Foods went into partnership with The ISH Company, and in 2021 Nomad Foods announced a collaboration with BlueNalu to commercialise cultivated seafood.

This sector may be less mature than plant-based meat or dairy, but with investments increasing from €21 million in 2019 to €175 million last year, and major global brands getting involved, big and small companies can have confidence in alternative seafood.

While the opportunity is huge, the scale of the challenge couldn’t be greater – or more urgent. Industrial fishing and aquaculture deplete species, pollute ecosystems and destroy vital habitats from coral reefs to seagrass meadows.

While the opportunity is huge, the scale of the challenge couldn’t be greater – or more urgent

Although a lot more government investment will be needed to accelerate open access research and a regulatory path to market for cultivated seafood, we also need more companies to step forward.

But the fact that a major conventional seafood trade fair has welcomed startups from the sustainable protein sector is a positive sign for the future of our oceans.

Many thanks to Carlotte for the report and to all at the GFI Europe.