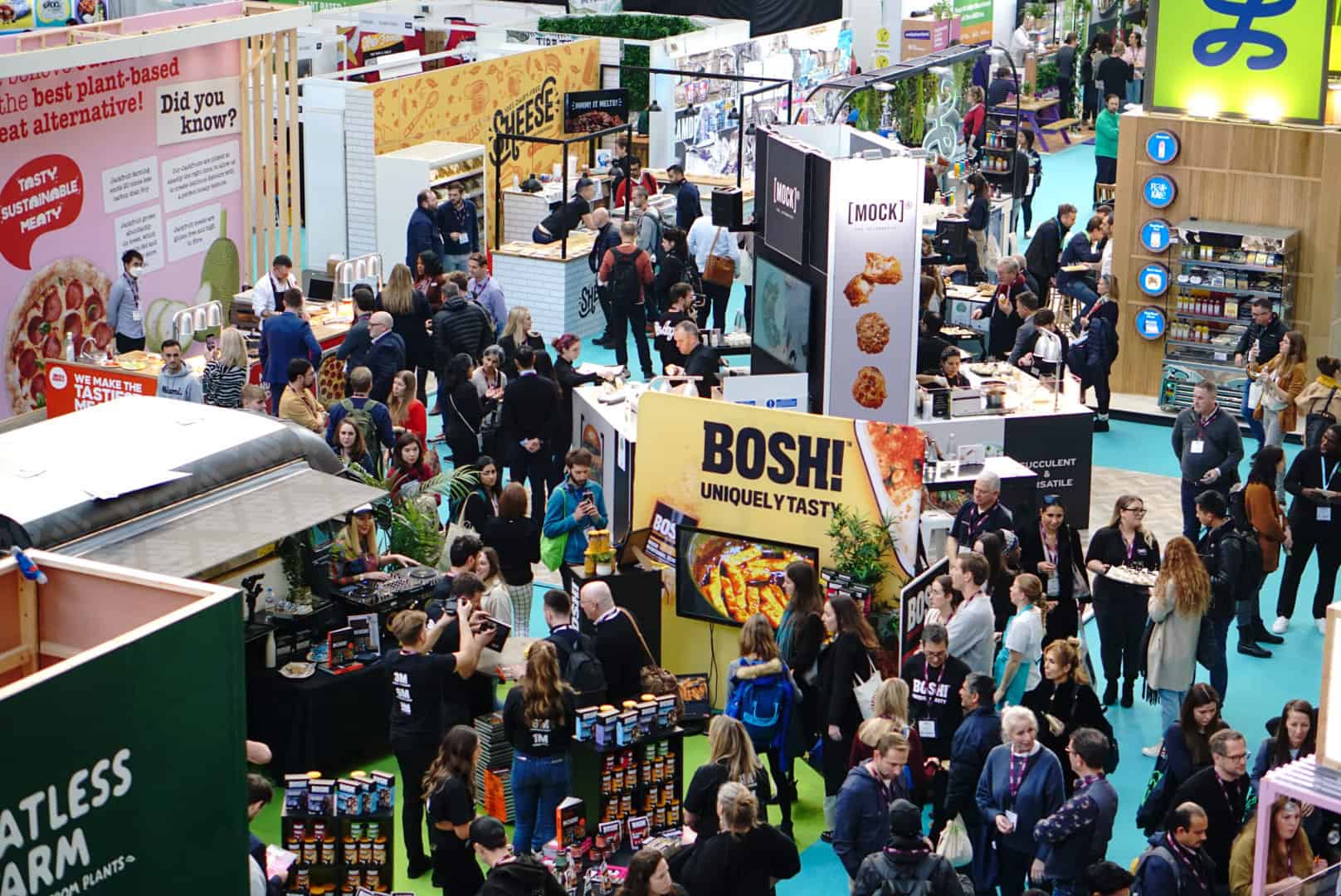 Plant Based World Expo Europe took place at London’s Olympia last week, hosting the most exciting names, both established and emerging, in the plant-based industry. Incredibly, the organisers have informed us that the event almost doubled in size, with a 94% increase in visitors compared to 2021.

vegconomist was present at the event and took the opportunity to ask some of your favourite brands about what’s currently exciting them, at the end of this eventful year. In alphabetical order:

Future Farm is excited to have launched in the UK with food service distributor Brakes. The Brazilian alt meat producer has had a successful year across international markets, including expanded retail distribution in the US. 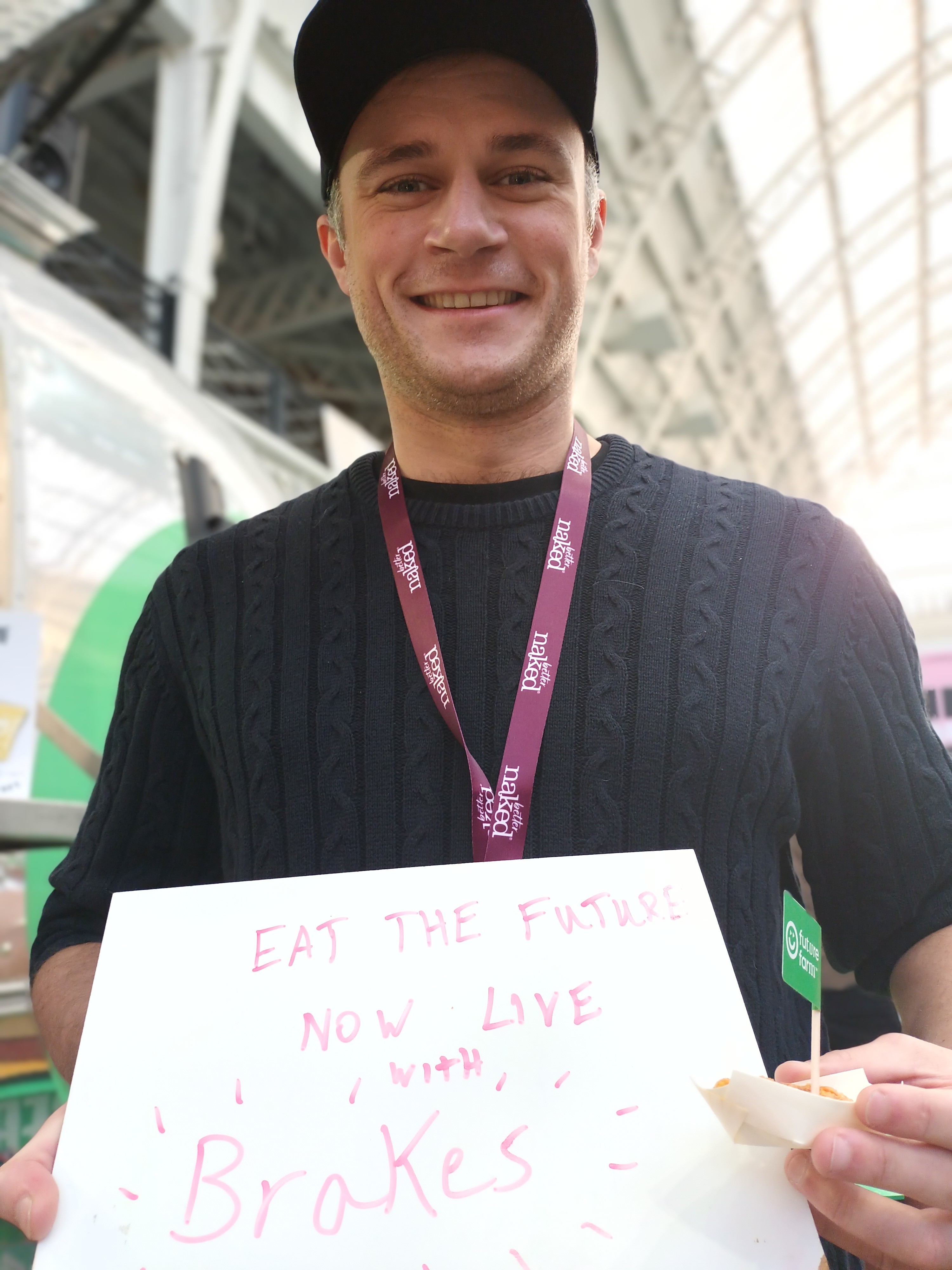 Also of Brazil, Grupo Planta operates its own restaurant chain in its home market, produces a large variety of alternative meat and dairy products, and also carries out white label and co-packing for supermarket chains and other brands in Latin America.

President Fabio Zukerman is incredibly excited about his company’s alliance with Brazilian President-elect Luiz Inacio Lula da Silva, a vegetarian who is keen on conservation efforts in the country. Mr Zukerman will reveal details in the new year as to the great work Grupo Planta is doing with Lula.

The French vegan bacon pioneers at La Vie have had an exciting year to say the least – far too much news to list here – enter ‘La Vie’ into the search bar on our homepage and you will see!

La Vie told us there will be a very exciting Veganuary announcement coming soon. For now, what’s exciting them the most is “bringing plant-based bacon smiles to everyone!” Well done for such a successful 2022, La Vie!

Wholesale seitan supplier LoveSeitan is the UK’s leading manufacturer of seitan products. Having recently cycled the entire length of the UK, Love Seitan founder Steve Swindon tells us he is currently excited about a charity collaboration which means that 25p from every seitan roast will be donated to City Harvest, a London charity which re-distributes food that would otherwise be wasted.

One of the leaders of the UK plant-based scene, Meatless Farm has had a great 2022 with several new product launches and retail expansions as well as a new line of ready meals.

Meatless Farm’s Charlotte Duke explained the brand is currently excited that its vegan tuna has launched for UK food service. Read our recent interview with founder and CEO Morten Toft Bech to find out more about the brand and its plans.

Organic foods leader Narayan recently partnered with MeliBio, the world’s first company creating real honey without bees, to bring this delicious bee-friendly product to 75,000 European stores. Through the new partnership, Narayan will sell MeliBio’s plant-based honey under the Better Foodie brand, with the first products shipping out in early 2023.

The forerunner of plant-based egg products in the UK, Oggs has enjoyed a successful year, with its hugely popular Scrambled Oggs now in 500 Sainsbury’s stores. Recently Oggs also relaunched its Vegan Luxury Handmade Mince Pies at over 700 Tesco stores for the Christmas season.

Joe Farrar, Brand Manager at OGGS, is simply excited about “making vegan eggs a thing” – congrats on all the great work guys.

The developer of “New Meat” has steadily rolled out its food service presence across Europe with a focus on high-end luxury dining as well as in famous department store Selfridges of London, and recently even appeared at Germany’s Oktoberfest to demonstrate its plant-based bratwurst. The Israeli company also announced, interestingly, a partnership with high-end conventional meat importer Giraudi Meats.

At PBWE Redefine showcased its 3D-printed steak, sausages and vegan pulled pork (which tasted delicious), as well as a sensory experience where participants could touch and smell the products’ components. 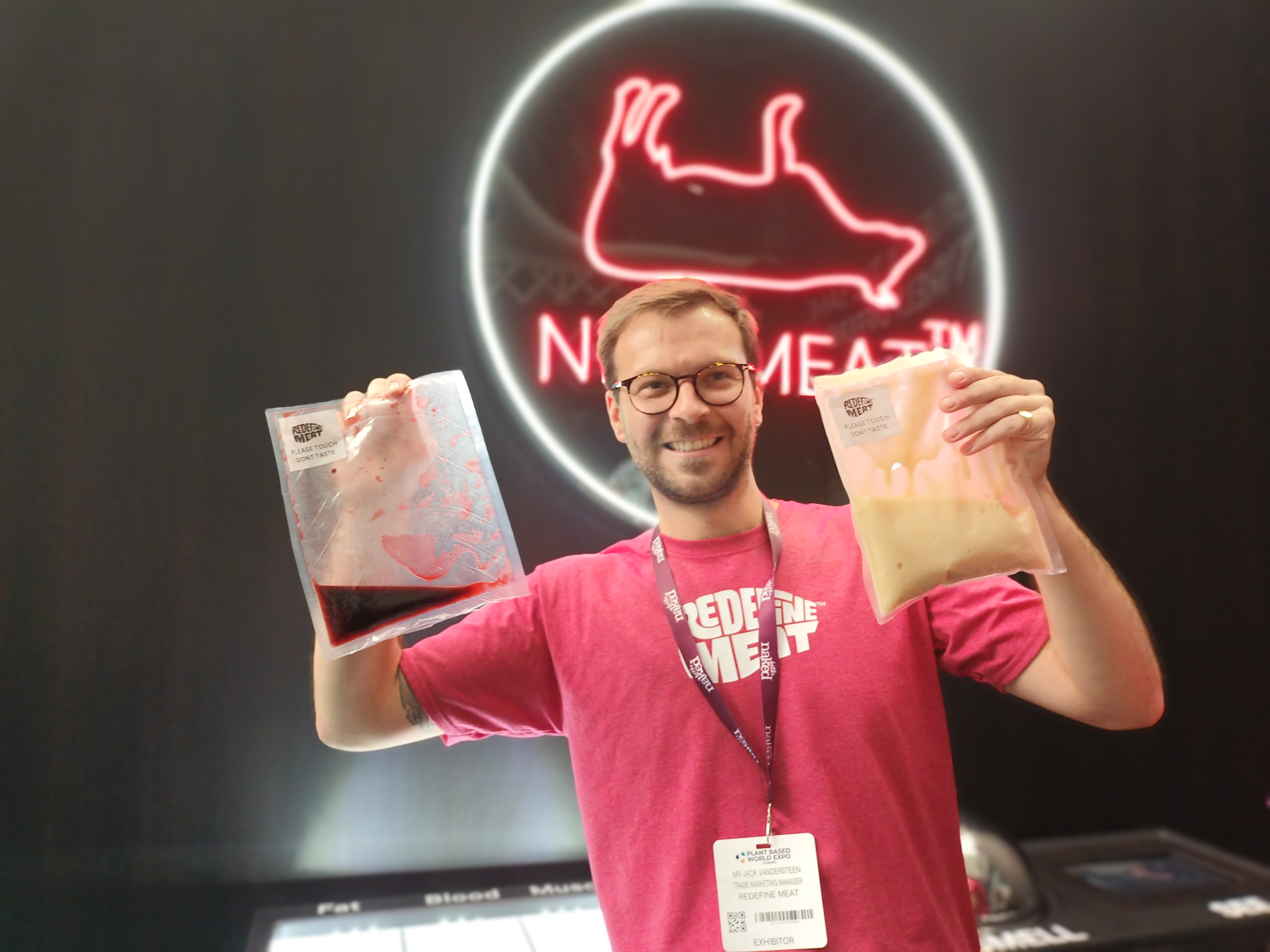 Austria’s Revo Foods has also had an incredible year, launching three new plant-based seafood products including new iterations of its delicious alt salmon, as well as spreadable vegan tuna and salmon. Founder and CEO Robin Simsa hinted there will be exciting developments in 2023 including new species, though could not divulge the details as yet…

Revo’s products are now available in over 20 countries Europe-wide, including France, Italy, Spain, Germany, and the UK. The company also recently announced it would be collaborating with Mycorena to develop a mycoprotein suitable for 3D printing — a move that could create “a whole new realistic meat-like product segment”.

Robin and the team are excited about the new whole cut salmon fillet which is coming very soon. Read our recent interview with Revo here to learn more.

Simply V, the market leader in Germany for plant-based cheese products, is excited to announce its UK market launch.

Five products will initially be available — gourmet slices in the flavours Mild and Intense, two varieties designed for grating and pasta respectively, and a mature cheddar-style block. The latter product will initially be exclusive to the UK.

Based in Ireland, Thanks Plants has quirky branding for its vegan sausages, festive roasts, and burgers. Aisling Cullen told us that Thanks Plants is currently excited to have launched at Planet Organic.

Last but by no means least, the wonderful Willicroft of the Netherlands continues to work wonders with beans to produce healthy and sustainable alt cheese.

Willicroft secured €2 million in funding earlier this year and began its Renegenerative Farming Project, in preparation for upscaling in 2023. Founder Brad Vanstone hinted to vegconomist that there will be a “Better” product coming in summer of next year….

Image 1 of 2
It was impossible to speak to all of the wonderful people at this year’s show, but we would like to congratulate and thank everyone who participated and organised, allowing many useful conversations and a space for the movement to continue to thrive.