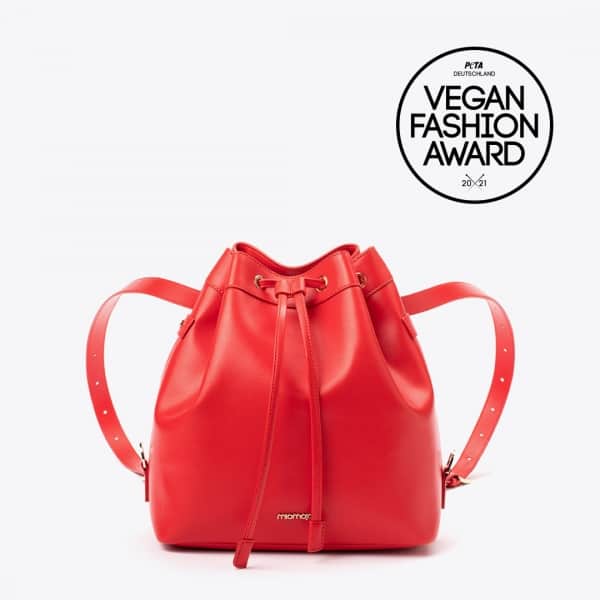 Sustainable Italian fashion brand Miomojo has been recognised by animal rights group PETA for its apple leather handbag. Known as Giorgia, the bag is made with waste produced locally by the juice industry.

PETA Germany named the bag Best Handbag of 2021 at its annual Vegan Fashion Awards. Previously, this award has been won by major brands such as Giorgio Armani, Stella McCartney, and Vivienne Westwood.

Giorgia is a “bucket bag” that can be transformed into a backpack by adjusting the handles. The body is made entirely from Appleskin vegan leather, while the inner lining is made from recycled plastic bottles.

Alongside its apple leather handbag range, Miomojo also offers products made from other sustainable materials such as bamboo, hemp, cactus leather, and recycled plastic waste like abandoned “ghost” fishing nets.

The company is not the first to receive a PETA award for using sustainable vegan leather — in August, Mexican cactus leather producer Desserto was recognised in the Materials category at the PETA Vegan Homeware Awards in the UK. At the same event, Canadian home furnishings designer Gus*Modern received an award for its innovative apple leather designs.

“PETA, the largest animal rights organization in the world, has honoured us with the award that celebrates the labels, style icons, and forward-thinking designers that have made big statements for animals in 2021,” said Miomojo in a statement. “Exactly what Miomojo stands for: respect for the animals, the planet and the people.”