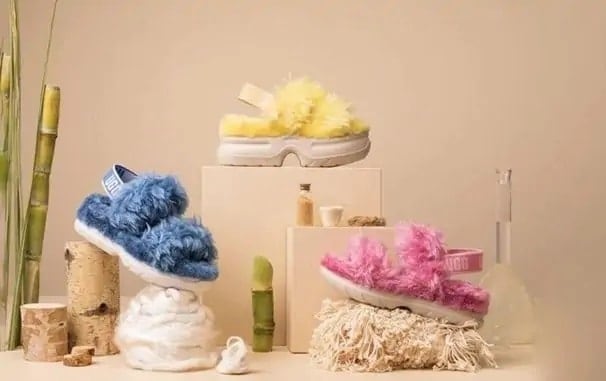 Despite, or perhaps in response to, its controversial, historical association with the animal cruelty involved in the making of its famous, sheepskin boots, UGG is attempting to join the vegan wave, describing its new Plant Power collection as “new styles with climate neutral, plant-based materials.” Whilst some vegans might use the term “greenwashing” for such moves, the move to increase plantbased materials can only be welcomed, even if they won’t do so until 2027.

The new Fluff Sugar Platform and Fluff Sugar Sandal styles are made with a fluffy material made from TENCEL Lyocell, based on regenerated cellulose fibres extracted from wood pulp, with the soles made from sugar cane. The Chukka boots are lined with TENCEL Lyocell and their soles are made of LACTAE HEVEA: a latex harvested from the Hevea rubber tree. The uppers are said to be “woven from an eco-friendly blend of 55 percent cotton and 45 percent hemp.”

The company says it is committed to making its products “better for both consumers and the planet” and says it will achieve this by “seeking out and using innovative materials.” UGG has also announced plans to increase its use of recycled, reused, regenerated (plant-based), renewable (bio-based) and certified fibres by 35 per cent by 2027.