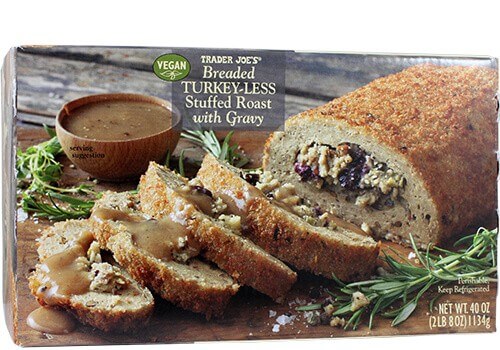 From 1st November, 62 Whole Foods Markets in the Southern Pacific region, including Hawaii, Southern California, Arizona, and Las Vegas, will offer vegan holiday dishes to keep up with the plant-based trend, including a vegan stuffed turkey. Read below for other plant-based turkeys available around North America this season.

“We wanted to offer a traditional holiday meal for vegans and plant-based eaters this year with a special entrée complemented by delicious sides,” Megan Tucker from Whole Foods told VegNews. “The Herbivorous Butcher is best-in-class in the seitan world and we are so excited about our new partnership.”

For other vegan turkey products check out the following:

Released a vegan turkey last year, which comes at 40 ounces for $12.99 and includes a gravy and breaded coating.

Has a Savory Stuffed Turky and a Holiday Roast.

Has a range of roast meats including: plantbased roast with wild rice; Everyday Ham Roast; and Roast and Gravy.

If you are a producer of a plantbased turkey or other vegan holiday product, and would like to feature your brand, let us know – [email protected].