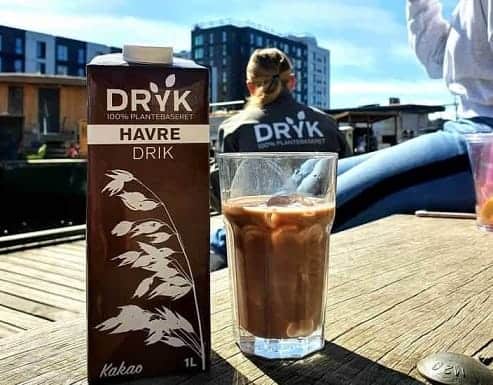 Dryk, the Danish producer of plant-based drinks, has entered an agreement to supply drinks to a number of café chains on the Chinese market, including some of the world’s largest brands in the sector. Dryk produces vegan milk from oats, hemp and peas, including barista versions for café use.

Chinese consumers were traditionally tea drinkers, but with the modernization of Chinese society and the influx of several large western café chains, the number of people drinking coffee has grown at an explosive pace. Right from the start, the team behind Dryk focused on the Asian market, as many Asian people are used to drinking plant-based products. Large parts of the Asian population are lactose intolerant, with some studies suggesting that at least forty times more people suffer from lactose intolerance in Asian countries in European countries.

In an interview with vegconomist, CEO of Dryk Christian Christensen explained, “Our sole aim is to make it simple for everybody to convert from animal-based to plant-based milk”.

The brand was established in the spring of 2020 and the company has since experienced massive growth. In recent months, growth has been over 30% per month, and with the agreement in China, the company expects to deliver extra revenue of up to DKK 70 million. Dryk’s products are not currently available for retail but are sold directly to the end customer as a subscription via Dryk’s website. The model has been a far greater success than expected and Dryk currently has over 3000 customers in the database.

“We are of course very happy with the agreement in China, and it is a great gift for both our team and products. Should I point out one thing that was decisive for the Chinese choosing us as a supplier, it is that they experienced that our plant drinks just taste better, and we are of course proud of that”, Christian Christensen told Presse Systemet.