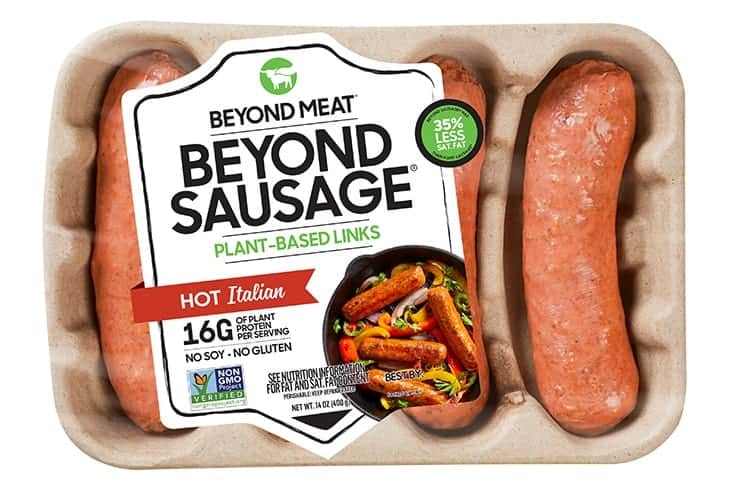 Beyond Meat has announced an expansion of its product offerings at Walmart stores across the US. Walmart will be adding Beyond Sausage Hot Italian to the fresh meat aisle at more than 400 stores, as well as expanding the frozen Cookout Classic value-pack to 500 stores. Here we list all of the retail and foodservice locations in the US where Beyond Meat is currently available.

The increased distribution is Beyond Meat’s second in the past year and will be within the 2,400 Walmart locations in which Beyond Meat products are currently sold. The vegan meat specialist is making efforts to increase worldwide accessibility to simple, plant-based meat products as demand for animal-free meat continues to rise. This increased distribution complements the company’s expansive retail presence at approximately 28,000 retail outlets across the U.S.

Beyond Meat recently struck another plant-based partnership with Peet’s Coffee to provide the patty for its new vegan sandwich, and its ambassador and actor-activist Leonardo DiCaprio recently asked millions of his followers on social media to incorporate more plant-based food into their diet.

“We are thrilled by the continued growth with Walmart and the opportunity to offer Walmart customers increased accessibility to a larger selection of our delicious and better-for-you plant-based products,” said Chuck Muth, Chief Growth Officer, Beyond Meat. “As more households continue to buy our products and buy them more frequently, we’re excited to satisfy the growing demand through increased product offerings and distribution.”