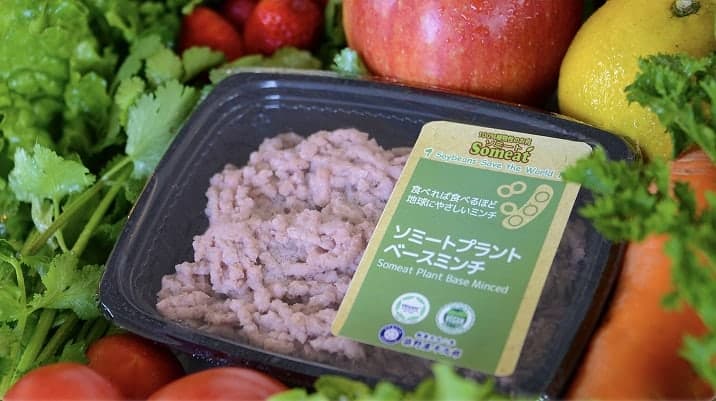 Bringing plant-based meats that make use of traditional Japanese technology to the world: Somenoya TOFU Co., Ltd. a long-established tofu manufacturer founded in 1862, has launched its first plant-based meat Someat. How does plant-based meat created with traditional techniques inherited from the Edo period look? Somenoya talks to Hiroto from freefrom Inc about the story behind the scenes.

If you take a look at the website of Somenoya, you will find the message “Soybeans Save the World”.

“I used to like meat so much that I ate steak from the morning, but with the birth of my daughter, I became aware of the global environment and wanted to solve environmental problems through my business,” said the representative Mr. Ono. After learning about the relationship between meat and environmental issues, he started to educate employees and R&D team on alternative meats.

After trial and error, tofu nuggets and grilled soybean meat were launched. While the main customer at that time was almost vegan, demand from non-vegans has increased sharply since last year. “In 2020, the mass media began to report news about soybean meat and “global environment, and consumers’ consciousness has begun to change,” Mr. Ono said.

In 2021, a new “Someat Plant-Based Minced” was launched. Mr. Ono said, “By developing an alternative meat for minced meat, we will advance the product development of domestic food manufacturers at once” and he is confident that “it can be used in exactly the same way as minced meat of animal origin.” Although it was difficult to devise the texture in developing the minced meat alternative meat, the technical cooperation with Danisco Japan led to the completion of “Someat Plant-Based Minced Meat” which is similar to minced meat of animal origin.

“Japan has a history of deforestation due to the rapid population explosion during the Edo period (it is said that 80% of the forest was deforested at that time). The “modoki cuisine (imitation food) that developed at that time is strongly related.” Mr. Ono says. When we looked it up, there are many dishes that use tofu in modoki cuisine（ex: Ganmodoki = fake chicken, Giseidofu = fake omlet). If you look at the history, tofu and alternative meat may have a high correlation.

Currently, it is mainly engaged in retail sales for consumers, but it seems that the company will strengthen wholesale sales through food manufacturers in the future. “Only adults today can change the global environment. I would like to continue research and development so that ecological activities can spread as cool actions,” says Ono.