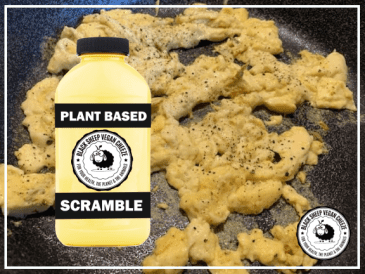 Feel Foods, a Canadian agri-foods holding company, announces it will launch plant-based bacon and eggs in a drive to enter the vegan breakfast segment.

Feel Foods recently acquired the British Columbia-based Plantastic Foods, which specializes in plant-based cheesecakes and burgers, and wholly owns Black Sheep Vegan Cheeze, producers of almond and soy-based cheese. Details about the upcoming breakfast products are limited, except for photos of a Plant-Based Scramble displaying the Black Sheep logo, suggesting that Black Sheep will play a key role in developing the new line.

In November, Feel Foods expanded its portfolio by acquiring Plantastic, which sells a variety of cheesecakes and veggie burgers in 22 British Columbia locations and e-commerce. Feel Foods signed the deal to help Plantastic grow sales, increase market exposure, and expand the brand’s reach across Canada and the US.

Black Sheep Cheeze products are currently sold at over 70 retailers and marketplaces in British Columbia, and the brand recently received the greenlight to begin exporting to the US. In addition to the promised bacon and eggs, Feel Foods and Black Sheep have already collaborated on a vegan whip cream, which will begin distributing through a network of retailers and foodservice following successful tests.

Regarding Feel Foods’ latest announcement, CEO David Greenway stated: “Breakfast segments of the plant-based foods industry are currently experiencing meteoric growth and we are aiming right at it with the imminent launch of our new eggs and bacon plant-based products. We feel these traditional breakfast items are part of a fast-growing segment of the plant-based movement and are highly complementary to our Black Sheep Vegan Cheezes and whip product.”

Vegan Bacon and Eggs are Booming

Sales of plant-based bacon and eggs have soared in the last five years, with the arrival of popular products like Hooray Foods’ bacon and JUST Egg. As animal-free bacon continues to advance in taste and texture, sales of the beloved breakfast meat have climbed 25%, and in 2020 the market for vegan bacon doubled to $267 million.

In November, San Francisco-based Hooray Foods received $2.7 million in seed extension funding to expand operations in order to meet the rising demand. The company is joined by a host of startups including Prime Roots, Atlast Food Co. and La Vie in the quest to create the perfect plant-based bacon.

Egg alternatives have witnessed even more dramatic growth, beginning with the game-changing debut of JUST Egg’s plant-based liquid egg. Since that groundbreaking product launch, startups the world over, from Perfeggt and Nabati to YO-Egg, Veggletto and Spero have all seized the opportunity to enter the ever-popular egg alternatives market, where 30% of consumers say they are likely to choose a plant-based option.