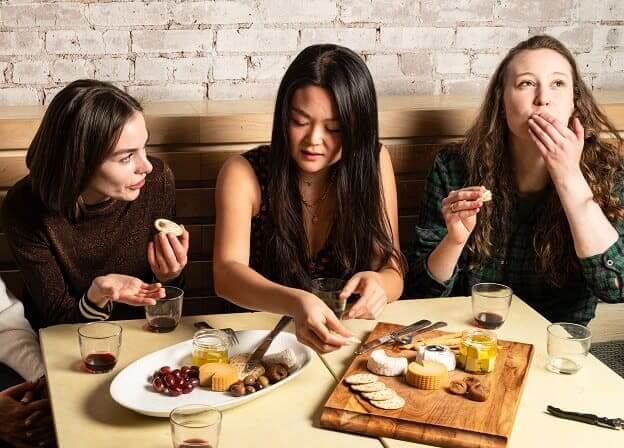 Grounded Foods annouces that it has launched online pre-sales for its first range of first-to-market vegan cheeses, created with cauliflower by Australian chef Shaun Quade. The cheeses aren’t scheduled to ship until June; however the LA based startup tells us that its specialty cheeses sold out within 3 minutes of the shop going live.

Grounded’s founder Veronica Fil said to vegconomist today, “We figured that if we waited around for things to get back to normal, production could be delayed indefinitely. But by opening up online pre-sales, we’re able to stick to our original production schedule.”

Fil tells us that Grounded’s specialty cheeses sold out within minutes of our shop going live. “We’re only doing small batches at the moment, but if everything goes well, we’ll put them into large scale production later this year.”

The first-to-market product range was crafted by Veronica’s vegan masterchef Shaun Quade, principally from cauliflower and hemp seeds. It’s no secret that cauliflower is a hot product right now and has been for some time, as plantbased producers are really seeing the massive potential behind this oft-forgotten veg as a versatile and cost-effective ingredient.

“We’re currently selling our Hemp Seed Cream Cheese, Marinated Hemp Seed Feta and our Cheese Free Cheese sauce. The latter was actually never intended to be sold outside of food service, but when restaurants began to close, we found that venue owners/chefs still asked to buy it from us just to use at home. So we’re going to include one for free with every pre-order sold.”

We asked where the range will be available. “The products are only available in the U.S. at this stage. That’s because we firmly believe in shaping environmentally sustainable, independent domestic food supply chains. That’s more important now than ever before. Although we have a lot of demand from the APEC region, it doesn’t seem right to ship products to the other side of the world, given the additional cost it would create for consumers and the environment.”

Prior to covid-19, Grounded Foods were on track to launch its products in June. But when the lockdown got serious, supermarkets and distributors put everything on hold, and stopped taking on new products. However, the market demand is still there, says Fil. “It’s just that it’s shifted to new channels (like online delivery). So we had to quickly adapt and work out the best way to get our cheeses into people’s hands!

“The current economic climate is going to put a lot of plant based startups in a risky position, because without support they might not make it. From a consumer perspective, that means we could miss out on some amazing products that are being developed! We really want to ensure that Big Dairy isn’t the only choice left on the shelves once covid-19 is over. So it’s super important to support startups/small businesses in the plant based space right now–not just us, but everyone who’s thinking about our future food system. Ordering directly from the company is a great way to support your favourite plant based products.”