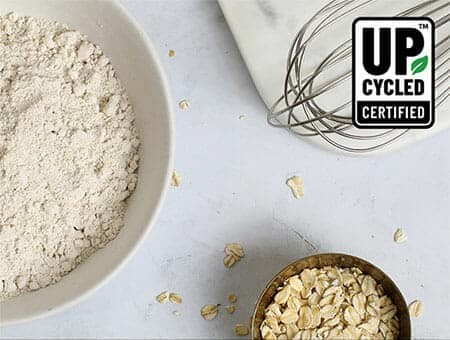 Plant-based food and beverage company SunOpta has launched OatGold™, a protein powder made with upcycled oat milk waste. The highly nutritious powder can be used in baked goods, spreads, dips, and snacks.

OatGold is made from insoluble solids which are a byproduct of SunOpta’s oatbase production (oatbase is the primary ingredient in oat milk). The resulting powder has three times as much protein as oat flour and is high in fibre. It also has a neutral taste and is certified gluten-free.

OatGold has been accredited by Upcycled Certified, the only third-party certification program in the world for upcycled products. The program was created according to standards set by the nonprofit Upcycled Food Association.

Upcycled foods are a growing trend as many companies look to reduce the huge amount of food wasted every year worldwide. From making alt dairy products out of fruit pits to transforming cabbage waste into functional proteins, there is now a huge amount of innovation in this area.

“We divert insoluble solids from the oatbase manufacturing process to create a reimagined ingredient that is nutrient-dense and delicious,” said Lauren McNamara, Vice President and Assistant General Manager at SunOpta. “Upcycling is elevating all food to its highest and best use by transforming surplus ingredients into new, high-quality products like OatGold. It’s a quintessential example of the combined power of innovation and sustainability at SunOpta.”

In 2020, SunOpta announced that sales of plant milks were skyrocketing, and that it would be investing $26 million in a new oat milk facility to help meet demand. The company expanded further last year by acquiring plant milk brands WestSoy and Dream at a cost of $33 million.

“This transaction is very consistent with our previously stated objective of pursuing strong organic and inorganic growth in our plant-based business,” said SunOpta CEO Joe Ennen.