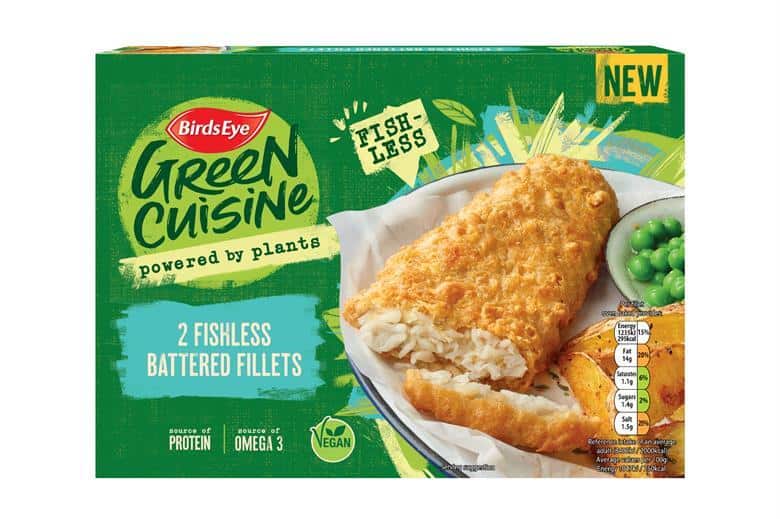 Frozen food brand Birds Eye has added Battered Fishless Fillets to its plant-based Green Cuisine range in the UK. The launch follows the success of the brand’s first alt-fish product, Fishless Fingers, which achieved £630,000 in sales in its first year.

Inspired by Birds Eye’s popular conventional battered fish fillet, the new product is made with rice protein for a flaky texture. It is a source of protein and omega-3 fatty acids, and is coated in the same batter used for the traditional fillet.

Birds’ Eye says the popularity of its Fishless Fingers has helped it increase household penetration from 9.1% to 9.8%, and the company believes there is much more potential for expansion in the alt-fish category.

The Battered Fishless Fillets are now available at Tesco with a recommended retail price of £3. They will roll out at other supermarkets over the course of the summer.

Birds Eye has an extensive plant-based range available in the UK under the Green Cuisine brand. This includes burgers, meatballs, sausages, pies, and several chicken alternatives.

Elsewhere in Europe, the Green Cuisine range is sold under the iglo brand, which is owned by Birds Eye’s parent company Nomad Foods. The range is available in 12 countries, with products including plant-based baked fish and chicken dinos.

“Our Battered Fishless Fillets tap into the consumer demand for products that can help them reduce their meat intake while ensuring flavour, health and convenience remain,” Green Cuisine senior brand manager Victoria Westwood told The Grocer regarding the new UK launch. “Following on from the success of fishless fingers, battered fishless fillets offer a range of nutritional benefits, such as being a source of omega-3, which plays an important part in maintaining heart health.”