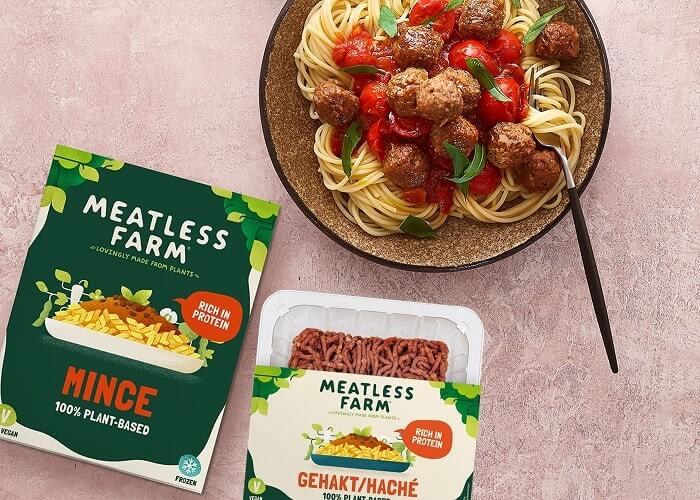 The Meatless Farm, known as UK’s fastest-growing plant-based meat company, has announced it will set foot in Mainland Europe. Starting with Germany, the Netherlands, and Denmark, Meatless Farm products will not be available in regular supermarket chains but in innovative online supermarkets.

In September, The Meatless Farm raised $31 million to support its global growth strategy. After gaining a foothold in Switzerland earlier this year, the company now plans to make its vegan meat products such as meatballs, mince and sausages, widely available across further European countries.

The UK brand is known for directing its bold advertising campaigns mainly to meat-eaters and flexitarians, as with the catchy £1.55 million “M*** F***” campaign. According to a recent study by the German University of Hohenheim, flexitarians are rarely addressed in advertising plant-based products, especially in many Mainland European countries, including Germany and Denmark.

It remains to be seen whether we can expect a similar campaign in these countries soon, but for now the choice of retailers in Mainland Europe is certainly a forward-looking one.

In the Netherlands, Meatless Farm products can be ordered via the online supermarket app Crisp. A special feature through the online retailer is the ability to buy directly from manufacturers, with the vendor only ordering when the customer does, resulting in lower costs and less food waste.

In Denmark, the online retailer Nemlig sells the products of the plant-based company, which is a pioneer in sustainability. By 2021, 100% of the company’s electricity needs are to be covered by its own solar park, which is considered to be Northern Europe’s largest of its kind. In addition, Nemlig is also committed to reducing food waste, with a target of 50% reduction by 2030.

In Germany, the products can be ordered from the online supermarket pioneer MyEnso. Founded in 2017, MyEnso is the first cooperatively organised supermarket allowing customers to decide what they want on the shelves – and these are mainly vegan and vegetarian products. In addition, the online supplier actively supports the development of a diverse food supply in rural areas where plant-based products are hardly available.

Talking about its concept and prospects, MyEnso comments: “In 2025 we will be one of the top 3 online retailers and will be able to deliver food to every corner of Germany. We don’t want to be the leader in classic supermarket products, but we want to be the much better alternative in the special assortment of vegan and vegetarian products.”