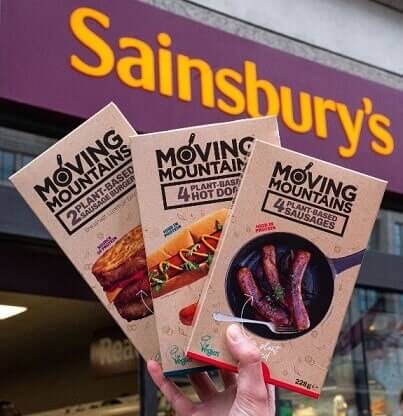 Moving Mountains, the food tech company which launched the UK’s first plant-based ‘bleeding’ burger as a British answer to the Beyond Burger, announces it is partnering with Sainsbury’s to make its products available in UK retail outlets nationwide, for the first time ever.

Simeon Van der Molen, Founder of Moving Mountains says: “We have partnered with Sainsbury’s to make our ground-breaking products available in UK supermarkets nationwide for the first time ever.

“We have spent years perfecting our recipes with a team of scientists, farmers and chefs to ensure our products emulate meat in taste and texture and they are the closest replication to a pork burger, pork sausage and hot dog in the UK. Until now, Moving Mountains® has only been available in top casual dining chains such as Hard Rock Café and Planet Hollywood, and has been a UK success story leading the plant-based movement in this sector. However, now is the right time to launch into supermarkets and bring Moving Mountains® into consumers’ homes, whether they follow a plant-based, vegetarian or flexitarian diet.”