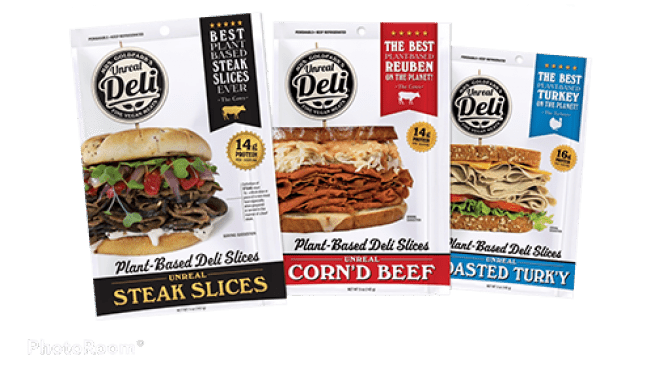 Mrs. Goldfarb’s Unreal Deli announces its plant-based deli slices are now available in 40 Costco locations across Southern California and Hawaii. For the launch, the brand has created an exclusive combo pack featuring all three of its signature meats, and will host in-store product sampling in June.

The new 1 ½ lb combo packs include 8 oz each of Unreal Deli’s Steak Slices, Corn’d Beef, and Roasted Turk’y slices, allowing customers to enjoy the full product line at a bargain value. On June 6, 10, and 11,  Unreal Deli will be present at all 40 store locations to sample its products prepared with Vevan dairy-free cheese.

From Shark Tank to sub chain

“It’s now going to be easier than ever to stay stocked up on delicious and nutritious deli slices to satisfy those Reuben, Cheesesteak, and Turkey Club cravings with our biggest and most Unreal Costco-sized combo pack,” Unreal Deli founder Jenny Goldfarb told VegNews.

Goldfarb also notes the bulk box may be expanded to additional Costco stores depending on consumer demand. Unreal Deli first gained prominence after securing a successful deal with Mark Cuban on Shark Tank. The brand is now carried in thousands of retail locations, including Publix and Whole Foods, and helped launch a delivery-only vegan sandwich shop chain in March.

“As a busy working parent of three adorable and energetic young kids, I know how hard it is to keep everyone fed with healthy, nutritious, and cruelty-free food,” Goldfarb shared. “Whether your family includes kids, roommates, or fur babies, this expansion into Costco, with our brand new (and best value) family-size combo pack, is super exciting—we’re now making even bigger deli dreams come true.”