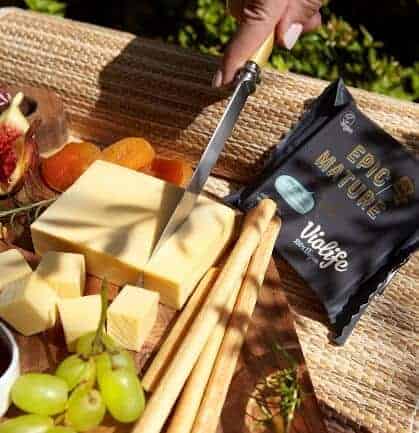 Plantbased leader Upfield has just now announced plans for a new state-of-the-art Food Science Centre in the Netherlands. This follows this morning’s news from Beyond Meat on the opening of a co-manufacturing facility as well as the acquisition of its first production site outside of the US, both also in the Netherlands.

Upfield, which owns Violife cheese as well as spreads such as Flora, today also reports plans to open a new Global Headquarter office in Amsterdam. The company says that its intent to open the facility before the end of 2021 is a clear demonstration of its commitment to the Netherlands. Wageningen is reportedly considered as a Silicon Valley of the food industry and a world-class location for food innovation.

Following today’s news from Beyond Meat regarding its two new Netherlands locations as well as a new focus in the region for Upfield; is the Netherlands set to become the new plant-based industrial heart of Europe? Vegconomist is in touch with Upfield and will report further on this subject early next week.

By choosing Wageningen as the location of the new Upfield Food Science Centre, the company says it will be able to maximize the benefits of the surrounding area including its proximity to The Wageningen University & Research (WUR), which is ranked as the world’s leading University in Agri-Food and serves as the core of a leading Agri-Food Ecosystem.

Commenting on the investment, Group CEO David Haines said, ‘The announcement today demonstrates our commitment to ambitious and pioneering research and development. Our track record is good. Since Upfield was established under two years ago, we have already launched new and industry-leading plant-based cheese, cream, and butter products.

“The new Upfield Food Science Centre will allow us to accelerate our ambitious agenda and develop even more options so people can enjoy great tasting, natural, plant-based foods that are not only beneficial to their health, but to the planet. As a global leader in plant-based nutrition, we are extremely excited by what this investment means for the future of the category.”

John Verbakel, Chief Research and Development Officer said, “Investment in the new Upfield Food Science Centre will give us access to state-of-the art equipment, technology and an inspiring and creative network of individuals and companies, allowing us to really push the boundaries of what we can achieve in natural, plant-based foods innovation. It is exciting to be part of a company committed to such a large-scale investment, which recognizes the importance of food science and plant-based foods.”