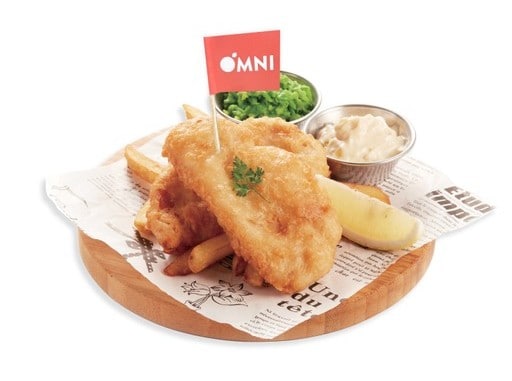 Alt-protein brand OmniFoods announces its popular OmniSeafood line is now available in the US via online retailer GTFO It’s Vegan. The range, which features a “game-changing” whitefish fillet alternative, launched earlier this year in the UK.

According to OmniFoods, all three products offer a good source of omega-3 fatty acids while being free from hormones, trans fats, and mercury.

Prior to the US launch, OmniFoods has been actively promoting OmniSeafood’s rollout in the UK. In May, the brand joined with London restaurant Vetomeato to give away free vegan fish and chips made with its plant-based fillets. Earlier this week, the company partnered with UK fast food chain Oowee Vegan to launch the Ocean Burger, featuring an OmniSeafood breaded fish patty.

OmniFoods co-founder and CEO David Yeung says the company hopes to repeat the success it saw for OmniPork’s US debut. “After the successful launch of our OmniPork series throughout the U.S. last year, we are incredibly excited to offer our new OmniSeafood products through our partners GTFO It’s Vegan,” comments Yeung.

“We continue to be impressed with the level of innovation coming from OmniFoods,” shared Marc Pierce, CEO and Co-Founder of GTFO It’s Vegan. “Omni has definitely taken plant-based fish fillets and crab cakes to the next level. There is such a high demand among our customers for new plant-based seafood options and we are so excited to launch these amazing products.”