Dr. Ernie Ward: “If You Want to Save the Planet, Start With Pet Food”

If you want to save the planet, start with pet food. 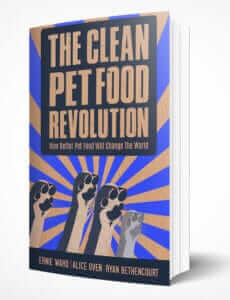 I came to this realization in 2017, after nearly thirty years convinced I was already advocating for animals and the planet by living as a vegetarian and vegan. As a veterinary entrepreneur and leader, I persistently – albeit subtly – encouraged my colleagues to adopt a plant-based lifestyle to improve their personal health, advance animal welfare, and boost their bottom line. In my experience, doing good for animals meant my business teams enjoyed better health, productivity, and creativity. I didn’t think I could do more than lead by example. And then my comfortable cruelty-free cocoon was ripped apart by a study titled, “Environmental impacts of food consumption by dogs and cats.” Scientists declared that pet food was destroying the planet. I realized that human meat consumption was just the tip of the iceberg, and, actually, there was a massive opportunity to do more.

The 2017 UCLA research proved that pet food was a major contributor to the ills I had pledged against by eliminating animal products in my personal life. As a veterinarian, I had assumed the foods we feed our dogs and cats posed little threat to the planet. Further, I reckoned that most pet foods were made from animal byproducts, thereby eliminating pet food as the actual reason for killing animals. This study confirmed how wrong I’d been. In addition to causing 25 to 30 percent of the total environmental impacts of animal farming (i.e. greenhouse gases, pesticides, land and water use), U.S. dogs and cats were eating over 25 percent of all animal-derived calories. The public’s insatiable appetite for high-protein, raw meat, “human-grade,” and “ancestral” pet diets was increasing demand for animal meats. This growth was further fueled by massive marketing budgets falsely claiming, “Your dog is a wolf and needs meat!” If the pets I served were a country, they’d be the fifth largest in terms of meat consumption. It became clear to me that we had a choice: feed fewer pets more meat, or feed more pets less meat. I choose more pets.

The impact pet food is having on climate change has received little attention. It’s no longer enough to evaluate only the human population and its food consumption when calculating environmental impacts: we must include pets in our dietary footprint. We won’t be able to save the planet if we ignore the climatological change our companion animals create. Because dogs and cats have become an integral part of human society, the way we care for them, specifically how we feed them, must also become part of the changes we make.

The pet industry is undergoing a tremendous boom backed by over $75 billion spent on U.S. pets in 2019, with $30 billion poured into food bowls. Baby Boomers are passing their leashes to younger generations, creating consumer chaos, threatening legacy brands, and driving innovation in pet care. Dogs and cats have truly migrated from our backyards and into our bedrooms. Now they’re taking over business boardrooms.

From 2009 to 2018, U.S. pet food spending increased at an annual average rate of 6.26 percent, totaling a 72.7 percent surge over the period, or an additional $12.8 billion. Coinciding with this rise, premium, grain-free, and high-protein pet foods have dominated market share at around 45 to 65 percent. This means more animal proteins are being diverted to pet foods, resulting in increased demand for factory-farmed animals and all its wrongs.

The heart of this shift is known as “pet humanization.” Dressing pets in sweaters, pushing them in strollers, and traveling the world alongside an animal is no longer demoted to the societal fringes. “Pet parenting” and its accompanying care (and expenditures) are the social norm for much of the world. Cutting edge surgery and medicines, a plethora of veterinary specialists, and home delivery of nearly any imaginable product or service are instantly accessible to anyone with a dog or cat and an internet connection.

As this new generation of pet parents moves online, they are being manipulated by marketing professing that pets need high-protein animal meat diets. The message is clear: you’re a bad pet parent if you feed anything less than meat, poultry, or fish. Veterinary nutritional science concludes something quite different: pets need specific nutrients, not ingredients, to thrive. By suggesting animal meats possess magical properties such as “high quality,” “ancestral,” or “biologically appropriate,” young pet owners are being fooled into believing pets require animal proteins, despite their own transition toward plant-based diets. By purchasing meat-based pet foods, they are inadvertently incentivizing factory farming, contributing to climate change, and potentially feeding harmful meat-based foods. This causes problems:

Ernie calls this dilemma ethical feeding friction. Environmentally conscious people or those opposed to the cruelty of factory farming feel guilty each time they open a bag or can of conventional pet food. Although animal meat may never defile their own plates, they continue filling their pet’s bowl with the meaty chunks of contradiction. Some concerned pet owners attempt to ease their ethical feeding friction by cooking homemade meals with meat from high-welfare producers that employ “organic,” “free range,” and other potentially misleading marketing terms. But even in the best of these animal farms, animals suffer, and the environment is damaged. Killing animals can be a morally uncomfortable and ethically challenging experience, no matter what the pet food industry or packaging claims.

I decided to seize this once-in-a-generation opportunity to disrupt the factory farming system destroying our planet by targeting the market sector I knew best: pets. By late-2017 I had helped co-found a plant-based pet food company, Wild Earth, and in 2018 began working on a book detailing the problems and solutions for the planet’s pet food problem:

Pet food meats, leather goods, cosmetics, and other animal byproducts are also essential for the animal farming industry to remain profitable. Due to the intense price pressure and global competition for human- edible meat, poultry, pork, and fish, the U.S. meat industry would not be nearly as lucrative without these “value added” byproducts. According to the USDA Economic Research Service, beef, veal, and pork byproducts account for up to 19 percent of the industry’s total value. These byproducts help keep “human foods” cheap and allow the animal farming industry to thrive. Remove animal meats from pet foods, and their entire economic system is threatened.

The question for the next decade is whether we feed pets less animal meat, or feed fewer pets. We’re past the point where individual ideology and personal beliefs can be the main motivator. Changing our pets’ eating habits is a practical necessity for survival. The evidence is clear: if we continue consuming and feeding animal meat as we do currently, we’re not going to be able to sustain ourselves, much less our pets. It’s not science fiction to suggest that the dogs and cats snuggling in our beds will no longer be a viable expense in the looming climatological dystopia where our heated oceans are dead and our scorched fields bare. A world without pets? That’s not a scenario any dog or cat owner wants, so we need to radically rethink the way we produce our pet food. Scientists are calling for a “global shift” toward reducing meat in our diets, and this shift must include what we feed our dogs and cats.

What began with denial ends with optimism. The vegan, plant-based, animal-free revolution (or whatever we choose to call it) is sweeping into pet food, and this book takes readers inside the global cultural shift as it’s happening. You’ll gain insight into an aspect of the vegan crusade that will benefit the change you’re creating. If we’re going to dismantle factory farming and save the planet, we’ll need to target every element of the system in every way possible, including pet food. I hope you’ll join me in this future food revolution that leads to improved health, extended longevity, and eliminates animal suffering. Vive la révolution!