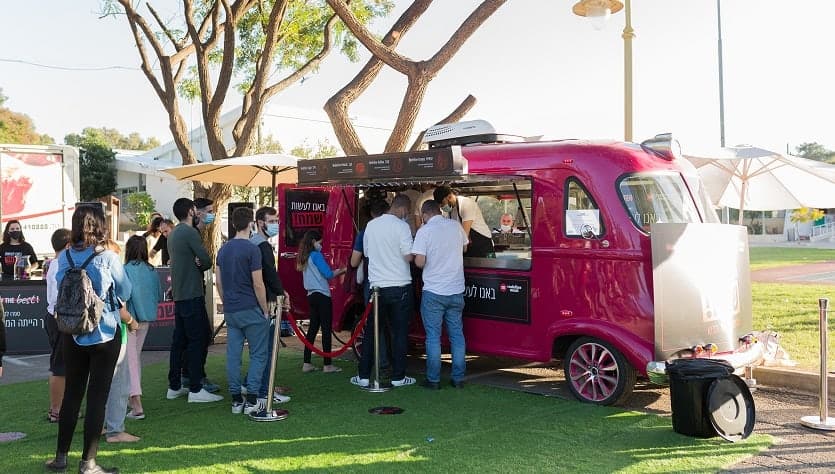 Israel’s Redefine Meat today announces it has carried out the largest-scale public blind-tasting of Alt-Meat products to meat-eaters, to what it calls unprecedented success. Conducted recently with Israeli meat distributor Best Meister, the companies launched a food truck concept named “There’s a new meat in town”.

Redefine Meat has formed a strategic partnership with Best Meister, who will distribute the company’s Alt-Meat products commercially to Israeli restaurants and high-end butchers in the first half of 2021.

The two companies set up a carnivore-branded food truck in a suburb of Tel-Aviv, with up to 200 tastings in two days. The truck cooked various meats to order, which were in fact Alt-Meat provided by Redefine Meat. Over 600 visitors reportedly attended the food truck and purchased close to 1000 servings of meat – selling out in less than five hours.

The company reports that, on revelation that the meat products were plant-based, consumer feedback was overwhelmingly positive in terms of taste, texture, and mouthfeel – with over 90% acceptance rate.

Eshchar Ben-Shitrit, CEO and Co-Founder of Redefine Meat comments: “We believe Alt-Meat should taste as good as animal meat – simple as that. Redefine Meat has achieved that with every product it has put to the test, transitioning the Alt-Meat conversation from health and sustainability and the view that ‘this is really close’ to ‘wow this meat is super delicious’. The incredible results of the food truck exemplify this. We initially only expected 100 visitors a day, as the event was held in a small village due to COVID-19 restrictions. But through word of mouth, we ended up receiving over 600 customers in one day – with queues as long as 50 minutes. What this has shown is that meat lovers can enjoy our alternative meat because it tastes and feels like meat – not solely because it is better for the environment or animals.”

The success of the pilot test marks a historic moment for Redefine Meat, playing a pivotal role in the formation of a strategic partnership with Best Meister.

Ori Zaguri, Best Meister CEO, comments: “We’ve been excited by Redefine Meat’s unique alternative meat offering for a while, but the food truck event cemented it for us. Not only was consumer feedback overwhelmingly positive but Redefine Meat’s technology will also provide us the scale to create a wide-variety of quality meat cuts for our customers on-demand from one single source. We believe the mass meat-eater market is ready for alternative meat of this quality and we are excited to be the first to deliver it to them.”