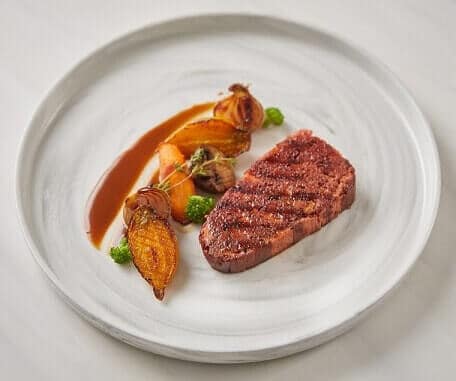 We have reported on similar developments have from 3D printers including NovaMeat in Spain and JetEat in Israel over the past couple of years. Redefine Meat, also in Israel, says it worked in collaboration with taste expert Givaudan in the development of this particular steak product. Layer by layer, the company’s proprietary industrial-scale 3D food printers create the steak using Alt-Muscle, Alt-Fat, and Alt-Blood plant-based formulations.

The company announced last September the raise of $6 million in a seed round led by CPT Capital for its 3D Alt-Meat Printer, in a round joined by Israel-based Hanaco Ventures, Germany’s largest poultry company The PHW Group, and leading Israeli angel investors.

“Since day one of the company, we have been working on creating a tasty and affordable plant-based alternative to steaks, one of the most cherished food products and the driver of the entire meat industry,” says Eshchar Ben-Shitrit, CEO and Co-Founder of Redefine Meat. “To enable mass adoption, we knew that creating an alternative meat product that was both high in quality and nutritional composition would require new technologies and production processes never seen before in the food industry. Today’s announcement marks the start of a new era in alternative meat – the Alt-Steak era – driven by production processes that will accelerate the development of a wide range of alt-meat whole muscle products and create a sustainable alternative to raising and eating animals.”

Ben-Shitrit continues, “The importance of using precision 3D printing technology to achieve texture, color and flavor—and the combinations between them—cannot be overstated. By using separate formulations for muscle, fat and blood, we can focus on each individual aspect of creating the perfect Alt-Steak product. This is unique to our 3D printing technology and lets us achieve unprecedented control of what happens inside the matrix of alt-meat. Collaborating with an industry-leader like Givaudan has led to the creation of an Alt-Steak product that is not only healthy and sustainable, but also offers the satisfying flavors, textures and aromas of eating actual meat.