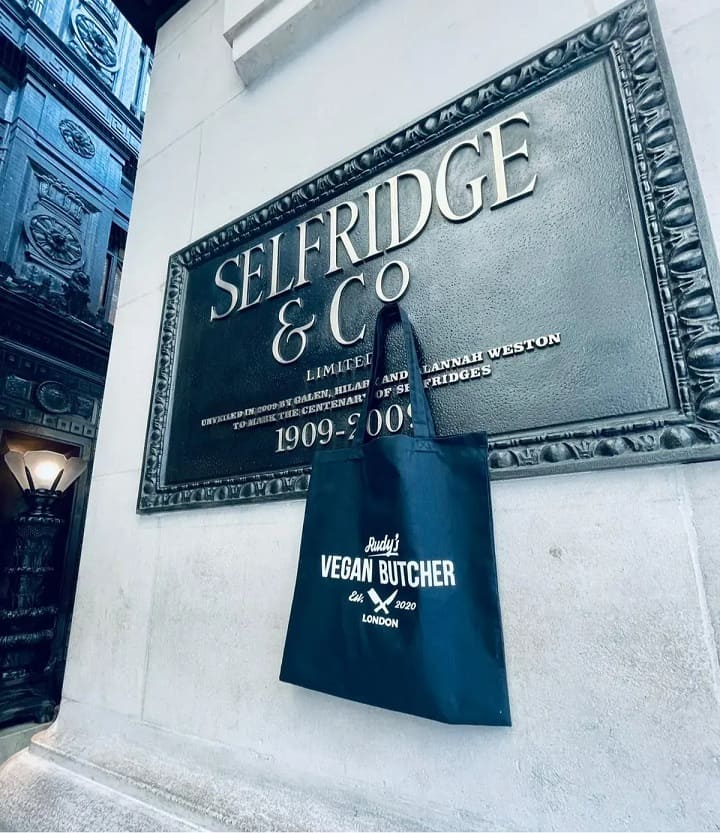 In the latest news in the global rise of the plant-based butcher, London based Rudy’s Vegan Butcher makes a significant leap forward by announcing the opening of a new location in exclusive UK department store Selfridges, as its second butcher’s shop location in addition to its popular diner. As of today, Rudy’s will offer its wide range of vegan meats in the store’s famous food hall.

With Selfridges’ flagship London Oxford Street store established since 1909 and being the second largest shop in the UK, the move for Rudy’s represents a major step up and the perfect opportunity to appeal to a broader customer base.

The London producer of plant meats will offer its popular charcuterie products such as vegan smoked ham, salami, pepperoni, pastrami, bacon and more, and according to social media will be celebrating by giving away its official tote bags with any purchase for the first week.

As London’s first plant-based butcher shop, its first location was opened back on World Vegan Day 2020 and consumers flocked to the store forming long queues causing it to sell out of stock, not just in the shop, but also online. A similar story occurred recently in Nottingham, UK, when vegan butcher Faux opened its doors for the first time experiencing immense popularity.

In a recent interview with vegconomist, Rudy’s founder Ruth Mumma explained: “Our aim has always been to start a conversation about the bigger picture of veganism, as well as get customers excited for Rudy’s. Our concept and our food is both a celebration and education of all things vegan.”