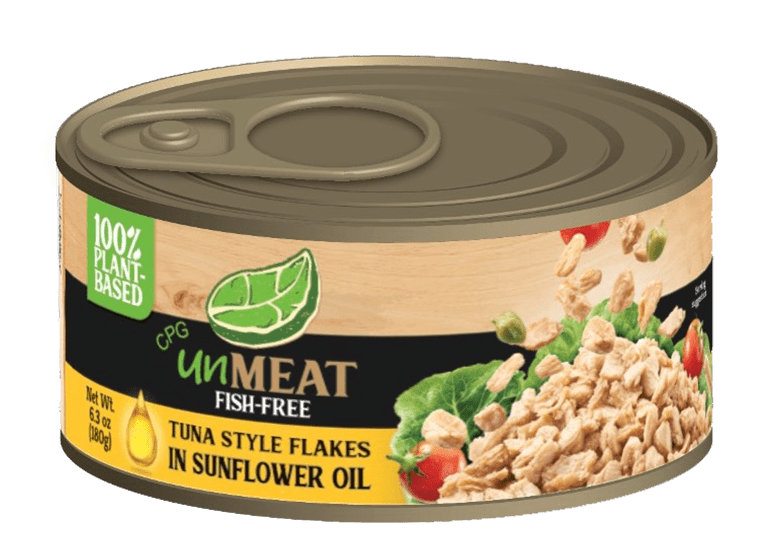 unMEAT, a plant-based protein brand owned by seafood giant Century Pacific Food, is launching its new fish-free canned tuna into online retailers and select supermarkets across the US.

According to unMEAT, canned tuna is the top-selling canned food in the US, with tuna products making up four of the top 25 best-selling canned food items. However, consumer concerns about mercury, pollution and heavy metal contamination has opened the tuna market to new diets and consumers seeking healthier options, unMEAT says.

To assess consumer response, unMEAT conducted taste tests with MetrixLab, and found that two in three consumers would select UnMEAT Tuna over the conventional kind. Furthermore, the company states its tuna was preferred three-to-one compared to other plant-based tuna brands.

unMEAT Fish-Free Tuna is now available via online retailers GTFO It’s Vegan and Weee!, as well as select stores in the US Midwest and East Coast. The company expects to add more availability at national retailers this fall.

First launched in 2021, unMEAT is owned by Century Pacific Foods, one of the largest fish and dairy producers in the Philippines. Claimed to be the first Filipino plant-based meat brand, UNMeat offers a range of burgers, sausages, nuggets and ground meat, in addition to the new tuna. Last November, the brand made its US retail debut at Seafood City Supermarkets in several West Coast cities, including Los Angeles and Las Vegas.

“We’re proud to introduce our fish-free tuna to the market, adding it to our versatile product range of burgers, nuggets, sausages, luncheon and ground meat,” says Gregory Banzon, Chief Operating Officer, Century Pacific Group, parent company of unMEAT. “Our company’s legacy is rooted in providing protein-rich brands of packaged foods over four decades, and we’re excited to offer a fish alternative for those looking to incorporate more plant-based foods into their daily lives.”