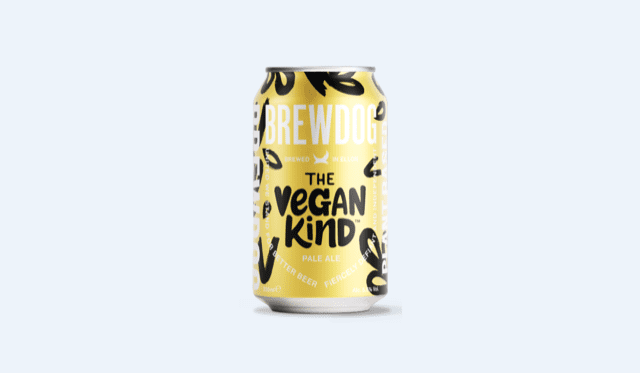 The recipe combines sultana and Columbus hops with Vienna malts, for a 5.5% ale flavoured with citrus, pineapple, and pine. The beer comes in 330ml cans featuring The Vegan Kind’s logo alongside BrewDog’s regular branding. Members of the brewer’s subscription service will receive the ale next month.

“We know that the BrewDog community are deeply passionate about our planet and making carbon-conscious choices with their food and drink, so we are really excited to collaborate. With a plant-based diet being reported to reduce your carbon footprint from food by up to 73%, we hope fans of BrewDog can join in on the TVK mission to Make Plant-Based Living Effortless,” said TheVeganKind CEO Scott McCulloch.

The Vegan Kind has gone from strength to strength over the past few years, last year securing £3.5 million in the largest ever funding round for a British vegan retailer. In late 2020, the company was growing so fast that it had to move production to a location eleven times bigger than its previous facility.

Speaking to vegconomist, Scott McCulloch explained the decision to upscale.

“We were trading out of a warehouse that was not serving our growth ambitions,” he said. “People now expect TVK to have the latest products as soon as they arrive on the market, and in order for us to continue serving our customers in this way we just simply had to move to larger premises, and I am so glad we did. Our new TVK HQ has provided the platform we needed for this next level of growth.”