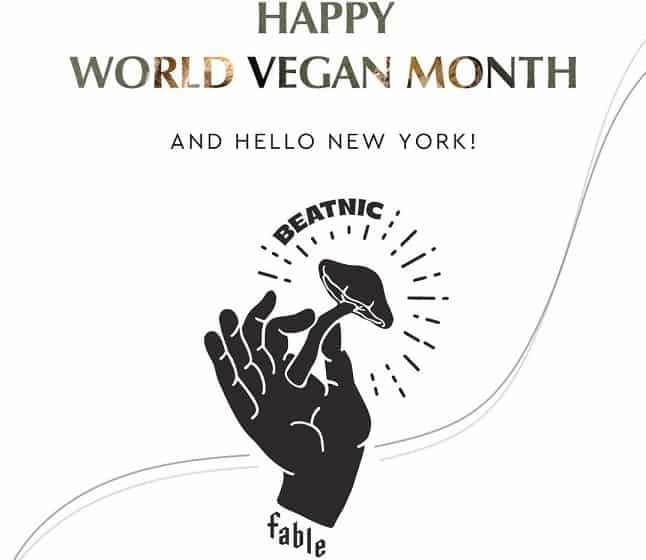 As part of World Vegan Month, the vegan restaurant chain formerly known as byChloe which rebranded as Beatnic this July, is partnering with Australia’s  Fable Food Co, to bring its mushroom-based meat products to the US for the first time. Headquartered in New York City, Beatnic operates ten restaurants in NY, Providence, and Boston.

“It’s incredibly exciting for us to bring our meaty mushrooms to the US market and be a part of Beatnic’s story as they continue to push the envelope and reimagine deliciously creative vegan food as we know it.”

Fable products are made with Shiitake mushrooms and are created by fine-dining chef and mushroom scientist Jim Fuller, leveraging their nutritional benefits and natural umami flavors. The company closed a $6.5 million AUD seed round this August led by Blackbird Ventures to expand growth and announced its plans to launch into the US by the end of 2021.

In addition to the Fable x Beatnic collaboration, Beatnic will also launch a ‘​​Plant Pass’ to encourage guests to eat more plant-based items for World Vegan Month. With the ‘Plant Pass’, guests can buy 4 entrees over the course of the month and get the 5th entree for free.

Available for the first time in the United States, Fable’s mushroom meat will be featured in two new menu items developed by the Beatnic team and available at all of Beatnic’s locations:

Catey Mark Meyers, President of Beatnic, says of the collaboration with Fable, “We are absolutely honored to be Fable’s first US partner and to collaborate on these specialty, mushroom-inspired recipes created just for our guests to celebrate World Vegan Month. The Fable product is one of the most dynamic we’ve seen – its rich and robust meaty flavor and hearty texture are the perfect complement to Beatnic’s fun and creative vegan recipes.

Michael Fox, Co-Founder and CEO of Fable Food Co, says, “We are so excited to collaborate with Beatnic as our US launch partner and add our Fable Meaty Mushrooms to their incredible menu in celebration of World Vegan Month. I first went vegetarian while living in the US and Beatnic’s Bleecker Street venue was my go-to on trips to New York City, so it’s a real personal thrill to partner with them for our US launch.

“We absolutely love Beatnic’s creative, bold and deliciously fun approach to delicious vegan food and we can’t wait for diners to get a taste of Fable served with Beatnic’s trademark creative flair. Leveraging the nutritious benefits and natural umami flavors of shiitake mushrooms, our Meaty Mushrooms bring a unique meaty mushroom-based protein that we know Beatnic diners will love.

Says Meyers: “The Loaded Shroom Nachos, which feature Fable Meaty Mushrooms and our house made Queso will satisfy even the most diehard omnivores and the Magic Mushroom salad which is fresh and vibrant is my new go-to order. We love that Fable is made with a short deck of clean ingredients and entirely vegetable-based; it’s really unlike anything available in the plant-based category, and we look forward to sharing it with our guests.”

“It’s incredibly exciting for us to bring our meaty mushrooms to the US market and be a part of Beatnic’s story as they continue to push the envelope and reimagine deliciously creative vegan food as we know it,” added Michael Fox.