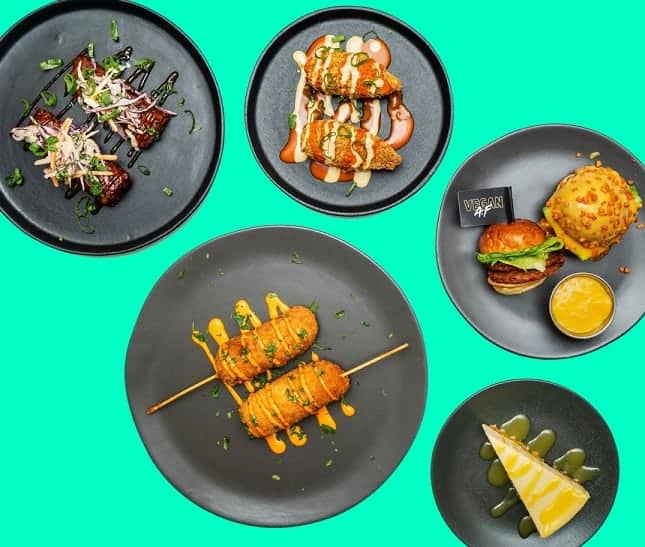 Biff’s, the London-based vegan restaurant and jackfruit brand which says is the UK’s largest vegan delivery operator, has created what could be the first home-delivery vegan junk food tasting menu. Co-founder Christa Bloom-Burrows tells vegconomist that the new kit, which includes five courses of “super-indulgent” vegan food, is already so successful that the first run sold out in under 48hrs.

The team is now busy re-stocking for new orders from next week and the kit will be available for the rest of February.

Launched in collaboration with Restaurant Kits, the founders of Biff’s describe the concept as “naughty cuisine meets haute cuisine mash up, this filthy ‘fine dining’ experience takes gourmands on a journey through vegan indulgence, moving between comfort food classics from Biff’s legendary fryers, to plant-based, takes on some street food favourites.”

The super-limited edition menu is only available during February at this delivery link and is priced at £45 + delivery for two.

Biff’s co-founder and executive chef, Biff Bloom-Burrows, says: “Biff’s mission is to make amazing and unique experiences food that just happen to be vegan – so we decided to create something different from a regular meal kit to bring a bit of fun into lockdown. It’s all about celebrating the joys of indulgence, but also thinking outside the (cardboard burger) box. We want to create something that looks pretty but still tastes naughty- there’s no reason plant based food can’t be both!”