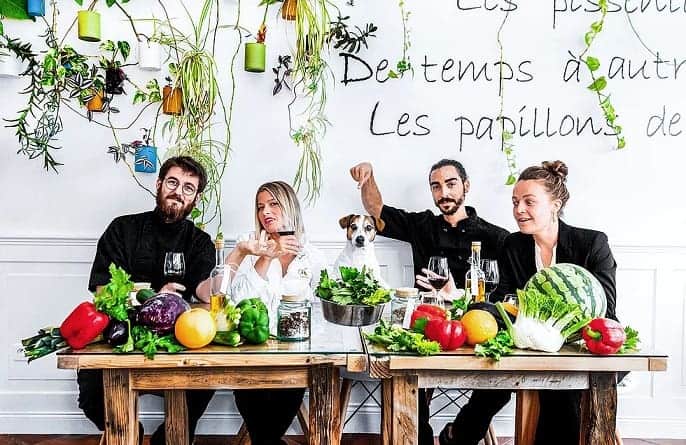 A French restaurant has been awarded a coveted Michelin star, the first of its kind for an establishment serving only plant-based food. ONA, in the south-west town of Arès in France, was launched via a crowdfunding campaign just four years ago. UPDATE: The first vegan restaurant with a star is Seven Swans in Frankfurt, as Seven Swans told us: “We, the SEVEN SWANS, have been consistently vegan for several years. In 2019 and 2020, we were awarded a star by the Guide Michelin, as well as the Sustainability Award. Thus, we are pleased to be the first vegan starred restaurant in the world. Chef Ricky Saward focuses on consistent, radical, regional, all-plant products, mostly homegrown.” The Guide Michelin judges: A MICHELIN star: a cuisine full of finesse – worth a stop!

ONA, which stands for Origine Non-Animale (animal-free origin), is 100% plant-based and owned and run by chef Claire Vallée. A former archaeologist, the 41-year-old became vegan after a trip to Thailand and taught herself to cook food of the highest quality. Located near Bordeaux, the restaurant becomes the first vegan restaurant in France to win a Michelin star, a further sign of movement towards plant-based dining trends in what is often seen as the most traditional of culinary worlds.

“It felt like I got hit by a train,” Vallee told AFP about the moment she got the call from the Guide Michelin. As well as the award of the classic star, Vallee also won a green star, which Michelin brought in last year to commend establishments which promote sustainable practices like recycling, food waste reduction and sustainable ingredient sourcing.

“We work with seasonal, organic and local produce. Our green terrace, open in the summer, has 140 varieties of edible plants used in our kitchen. Our energy is renewable, and we have a compost system,” Vallée explained to the famous foodie guide. Unfortunately, the restaurant is currently closed due to the ongoing pandemic.

When starting out four years ago, French banks refused the chef start-up capital when she went through traditional lending channels, “They said the outlook for veganism and plant-based food was too uncertain,” she recalled. Vallee used her initiative to secure financing through crowdfunding and with the help of Le Nef, a bank specialising in financing projects it considers ethical.

“More than a restaurant, it’s a way of life,” the Guide Michelin wrote in its review. “The beautifully dressed plates feature a splendid array of fruit and vegetables. Greatly deserving of the attention it is garnering.”