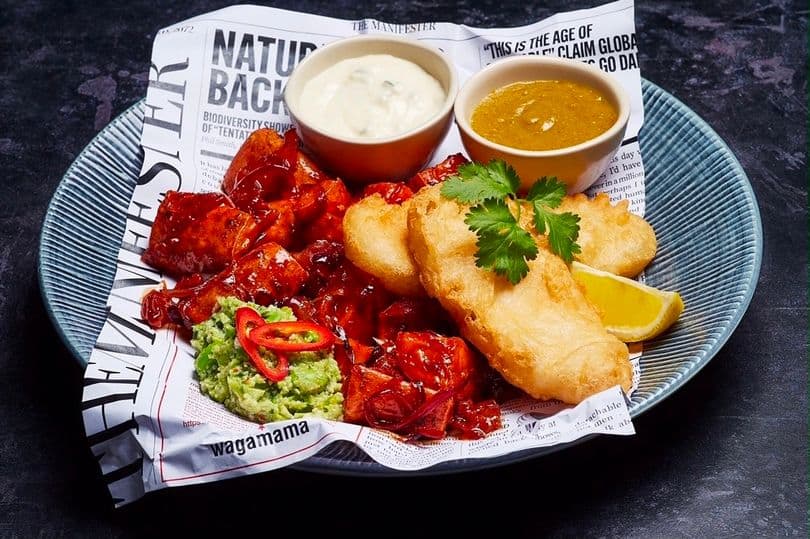 UK-based Asian fusion chain Wagamama has launched a new dish — plant-based Japanese-inspired fish and chips. The “fish” is made from battered soy, pea, and rice protein, in the style of the Japanese dish tempura.

Accompanying the fish is roasted sweet potato and red onion, along with Japanese style mushy peas made with edamame beans and katsu curry sauce. Other garnishes include chilli, a lemon wedge, waga tartare with Japanese pickles, and Wagamama’s firecracker sauce.

The dish is called Tempura F-ish + Bang Bang Yaki-imo, and will be available for £12.95 throughout the month of January.

Last year, Wagamama launched a new plant-based menu for Veganuary, veganising some of its most popular dishes such as Firecracker Curry, Grilled Duck Donburi, Cripsy Chilli Squid, and Vegan Sticky Ribs. At the same time, the chain announced it would be transitioning its menu to be 50% plant-based by the end of 2021.

In October, Wagamama confirmed that half of the dishes on the menu were now meatless, and launched its “Plant Pledge” campaign to encourage customers to help the environment by choosing plant-based options.

“We’re so proud of our 50% plant-based menu and we’re committed to encouraging more people to experience our plant-based options for themselves to help make a sustainable difference for our planet,” said Wagamama CEO Thomas Heier. “Which is why we’re focusing on offering dishes that are so delicious, they might even tempt the most uncompromising meat-eater to eat more plants, even if it’s just about making one sustainable swap a week.”